Guardians of Rescue and the Suffolk County SPCA are offering a current combined total of $5,000 for information leading to the arrest of the person responsible for the murders of 8 feral babies in a managed cat colony on Long Island, NY. The online animal advocacy community is raising awareness of the search for the killer. 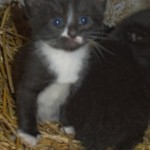 You may have seen the heartbreakingly disturbing photo set of the kittens brutally murdered last week and left at the scene at the cat colony where they were born. The images have been gathered on a poster being shared at Facebook to spread the word of the hideous crime and raise awareness of the hunt for the killer.

Guardians of Rescue animal rescue group members have been feeding and caring for the colony on an industrial lot in Bohemia, in Suffolk County, LI, and came upon the gruesome discovery of the dead kittens on May 4. The kittens comprised the litters of two mothers; one set three weeks old, the other set three day old newborns. The horrified caretakers took photos and brought the little bodies to their vet, who provided an analysis of what had been done to the babies as they were brutalized and killed. The caretakers report that the mothers ran frantically from shelter to shelter looking for their missing babies after the bodies were removed.

Guardians of Rescue said this about the incident, which occurred overnight between May 3-4:
“Lori is one of the most devoted, caring and self giving colony caregivers the Guardians of Rescue has ever known. She has been extremely active in TNR for over 10 years on Long Island and currently has several colonies under her wonderful and loving care. She is what we consider the model feral caregiver. Even when a few colonies near some of hers were abandoned recently by the feeder, including a few in advanced pregnancies, Lori gladly welcomed the newcomers into her colonies to be fed and cared for and continued with more TNR for the ones not ear-tipped. Guardians of Rescue have helped Lori with her colonies in the past, and we have great respect for this woman and all she does for the ferals. Guardians of Rescue fully supports TNR projects for feral cats are we are involved with numerous colonies and caregivers. Feral cats live one of the most challenging and difficult lives and we do everything we can with shelters, food, trapping and education to improve their daily living.

Lori called us on Friday morning in a state of panic and was inconsolable when we arrived. She was collecting and holding these cold crushed babies, shedding tear after tear on their lifeless and broken bodies trying to understand the mind of someone who could be so vile.”

Suffolk County SPCA chief Roy Gross asks anyone with information to call the SPCA at 631-382-7722. The killer could face felony animal cruelty charges. Beyond that, area residents deserve to know the identity of the person who would do such a thing.

Guardians of Rescue has set up a ChipIn to raise funds for their cruelty cases. The group is providing updates on the case at their Facebook page. They now have someone watching over the colony around the clock.

PLEASE NOTE: This second video includes more graphic descriptive detail and a blurred but still disturbing post mortem photo. Please only watch if you are willing to see and hear the disturbing material.