Last night we wrote about Scooter Missing Joplin Tornado Cat Finally Home 109 Days Later. Scooter was fostered by one of the women caring for the Joplin tornado cats, Bobbi Hill. Bobbi fostered a second cat, Elsa. Tonight we have the story of Elsa and Bobbi as told by Lisa Butler. Lisa is a long time animal advocate, and is one of the women working on the ground for the displaced cats of tornado ravaged Joplin MO. 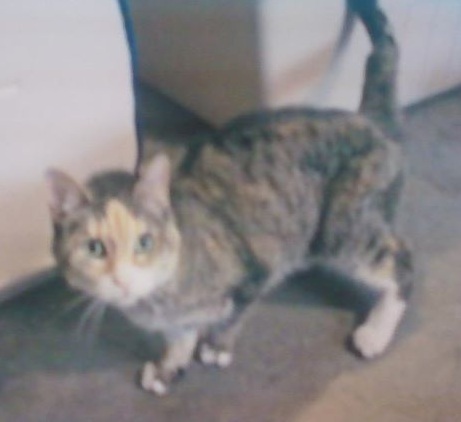 There is an angel in Joplin named Bobbi; we met up after the tornado.

Bobbi Hill rescued two cats from two houses no longer there on Bird Street in Joplin back in June, I believe.  One was fairly healthy, and one was very near death.  Scooter, the first one, was reunited with his owner last week (109 days since the tornado).  Elsa, the very sick cat, will be reunited with her owner this Saturday, they are coming up from Arkansas to get her.

Bobbi rescued Elsa, the cat in the picture, from certain death, quite literally. Elsa was taken from the crawlspace of her house the day before the house was bulldozed.  Bobbi nursed Elsa back to health and has taken her to the vet numerous times. She has gained her strength back.

Her owners who now live in Arkansas, formerly though on Bird St. in Joplin, are coming to get her later this week. They had her since she was a baby kitten. Bobbi took some photos of Elsa and sent them to the couple asking if she was their cat, and she is.

In searching for the families of Elsa and Scooter,  Bobbi has been to the Joplin Humane Society going through the lost lost and found lists from May 22nd onward. We use this book to help us know which areas have the most missing animals, and to try to locate owners if we have seen their cats (or dogs).

Many pets, especially cats, are still living in crawl spaces, under tree stumps, drainage culverts, basements, any place they can find shelter.  There are kittens living under a fallen tree at Yates Trackside Furniture that someone is especially trying to help.

We appreciate the cooperation of homeowners and businesses in allowing us to try to help these animals find their way home, or to a new home, and not starve to death.  I personally have more than 10 feeding stations set up that I fill daily, and there are two girls working with me who have their own feeding stations, as well as a group of women from Kansas, still reuniting pets.

Elsa will be the 6th cat reunited that we know of.  We want the residents of Joplin to know their pet may still be there. The stories of these pets being reunited with their families give the residents hope in more ways than one.  Many of these people lost everything, as you know, their homes, cars, belongings.  Being present at a reunion where a family gets their long lost pet back, especially now in September, it fills you with hope for the future.