A kitten injured when he was thrown from a moving car in Toronto on December 3 has been adopted by the woman who rescued him and rushed him to the vet for emergency medical care.

Animal rescuer Mandi Howard was in the right place at the right time when Potter/Pedro was thrown from a car onto a busy highway on December 3, 2014. The Toronto area woman witnessed the kitten being thrown from a car, saved the injured baby, and took him to get help. She has also offered to give him a home.

Mandi thought she’d seen someone throwing fast food trash out of their car window on Highway 427 in Toronto when she witnessed the kitten being thrown onto the highway. Then she saw fur blowing around on the ‘trash’ and realized what had actually happened.  She pulled off the road and walked carefully along the margin toward the animal, a kitten not more than a few months old, then waved away the traffic and picked him up.

Mandi, an emergency nurse, carefully wrapped the injured and screaming kitten and drove him to the Toronto Humane Society, singing to him during the ride to help calm him down

Vets at the Humane Society treated Potter for scrapes, sewed up his split lip, and put splints on his back legs. All of the toes on the kitten’s back paws were broken.

The Toronto Star reported Potter’s adoption by his rescuer on Sunday.

“The moment I saw him, I just started crying,” Mandi told the Star, speaking about the big day when Potter was finally hers. The tears were happy tears, and the Star described her as being ecstatic over the adoption.

Mandi renamed the kitten Potter after Harry Potter, “the boy who lived.” To celebrate the adoption, Potter’s foster mom even dressed him up like his namesake for the occasion, complete with custom black-rimmed glasses and a lightning bolt on his little head. (You can see the yellow lightning bolt in the photo at the top of this post.)

“We are delighted that he has a forever adoptive home,” said Makyla Deleo, a spokesperson for the Humane Society. “He’s just a happy little kitten at this point.”

Mandi told the Humane Society at the time of Potter’s rescue that she wuold gladly give him a home. She placed an adoption application on file and, while not promised the kitten, was given special consideration by the organization.

The situation became clouded in January, however, when the Humane Society said they had not received any monies from a sccessful Indegogo fundraiser started by a friend of Mandi’s. The Humane Society said they had covered Potter’s medical costs. There was talk of a possible police investigation for fraud, but the investigation was not pursued and Mandi was not removed from consideration as Potter’s adopter. The funds have since been dispersed to several organizations and causes, including the Toronto Humane Society, and the issue did not prevent Mandi from giving Potter a loving home.

An update at the Indegogo page on Thursday told how the $ 9,595 raised for Potter had been distributed :

All funds have been dispersed as indicated previously (only 1 donor chose to withdraw their funds):

Here is a breakdown of the distribution of the funds;

Today, the kitten now named Potter was officially adopted by Mandi Howard. Thank you all for your generosity and kindness not only for the 427 Kitten/Pedro — now named Potter but for all the injured and abused animals that will be saved by your donations. 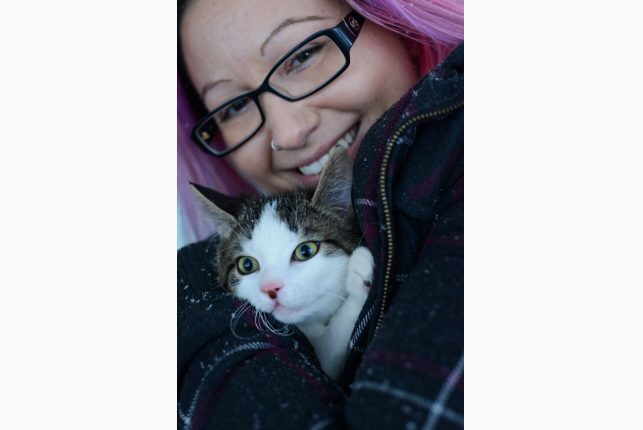