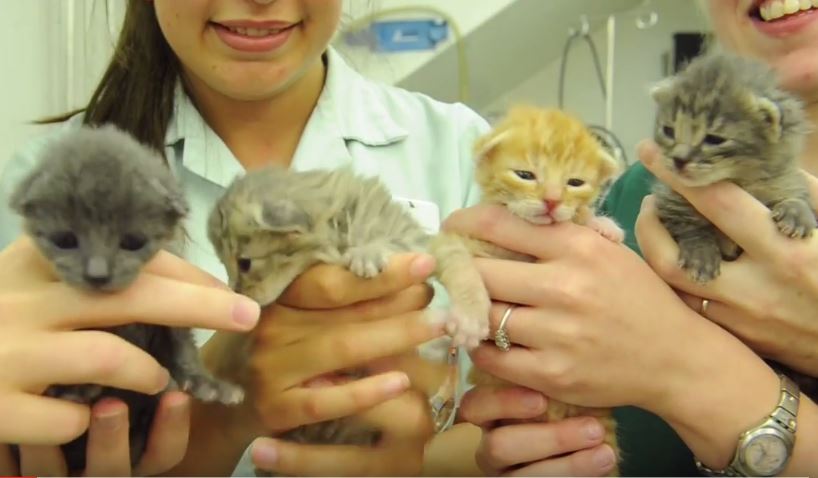 Four beautiful kittens dumped in a garbage bag at a skate park earlier this summer were rescued by good Samaritans, got loving care at a local vet’s and all found homes.

Orwell Veterinary Group’s Grange Farm animal hospital in Kesgrave, Suffolk, UK cared for the kittens, who were only a few days old when two young men brought them in after they were found at nearby Ipswich Skate Park.

Staff at the animal hospital lovingly hand-reared the adorable foursome and found good homes for them by the time they were ready for adoption.

Veterinarian Zoe Armes spoke with the East Anglian Daily Times last month for a story, saying she had been shocked at the kittens treatment before their rescue.

“They were brought in on Thursday, June 25 at around 10pm,” she said. “They came into our out of hours service. They were only a couple of days old.”

“The vet who was on call took them home and gave them kitten milk every two hours,” she added.

“The day after we drew up a rota with different staff members taking them home each day.”

Dr. Armes said the kittens were very lucky to have been found not long after being abandoned.

“It was appalling, especially leaving them at a skate park,” she said. “There are places that would have accepted them and there is a right way of going about it.”

The vet expressed her gratitude to the kittens’ rescuers, who placed the kittens into a box lined with a jersey and took them to the vet’s in a taxi.

“They did a really good job,” she said.

Watch the video showcasing the kittens and their story: 1 thought on “Rescued kittens nursed back to health”