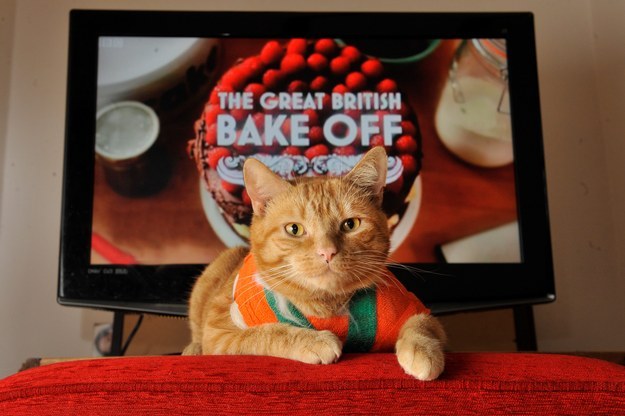 A 2 year old orange tabby cat recovering from a serious injury has gotten so hooked on a baking competition show he comes running when he hears the theme music!

Roger suffered terrible injuries when his collar became lodged underneath his front leg and needed surgery to put him on the mend. He came to live with his petmom Rachel McDermott around the beginning of the current season of the Great British Bake Off TV program.

Roger comes running to watch the show and will view it on a mobile device or the TV. When the show is on the TV, Roger will sit in front of the screen, follow voices, and stare intently at people’s movements.

Roger wears little sweaters to protect the area of his surgery and the many stitches it took to prepare him to heal properly.

The video below shows Roger in action with his favorite show!
. 1 thought on “Recuperating Cat Gets Hooked on Bake-Off Show”