Pip was the beautiful  injured kitten tied into a full bag of trash and discarded, then rescued when a woman getting her mail last Wednesday heard his cries. The BC SPCA made the sad announcement today that he died on Sunday. 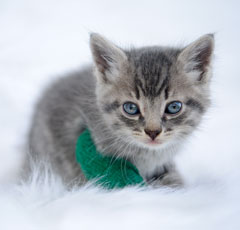 Despite receiving around-the-clock care by staff at the BC SPCA’s Shuswap Branch, “Pip”, the five-week-old kitten found inside a plastic trash bag on May 23 in Salmon Arm, British Columbia, Canada succumbed to illness and died on May 27.

The tiny kitten, whose immune system was likely compromised by being taken from his mother too early, was rushed to a veterinarian for intravenous fluids but could not be saved.

“He was being bottle fed but just wasn’t able to process the nutrients in his body and he eventually became too weak to survive,” said Lorie Chortyk, general manager of community relations for the BC SPCA. “Our staff did everything they could to save him but it just wasn’t possible.” 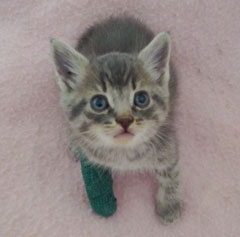 Chortyk said the SPCA is extremely grateful to everyone who offered their support to the Shuswap Branch and said that donations will be used to help other abused and injured animals in Pip’s memory.  “We rescue more than 32,000 abandoned and abused animals every year, including 7,500 kittens, and we are tremendously grateful for the community’s support.”

The BC SPCA is continuing its investigation into who may have left Pip tied inside a plastic trash bag on May 23 at the community mailboxes on Black Road near Highway 97. Anyone with information is asked to please call the Shuswap SPCA Branch at 250-832-7376.

For our earlier story on Pip see Injured Kitten Rescued From Trash Bag By Good Samaritan.