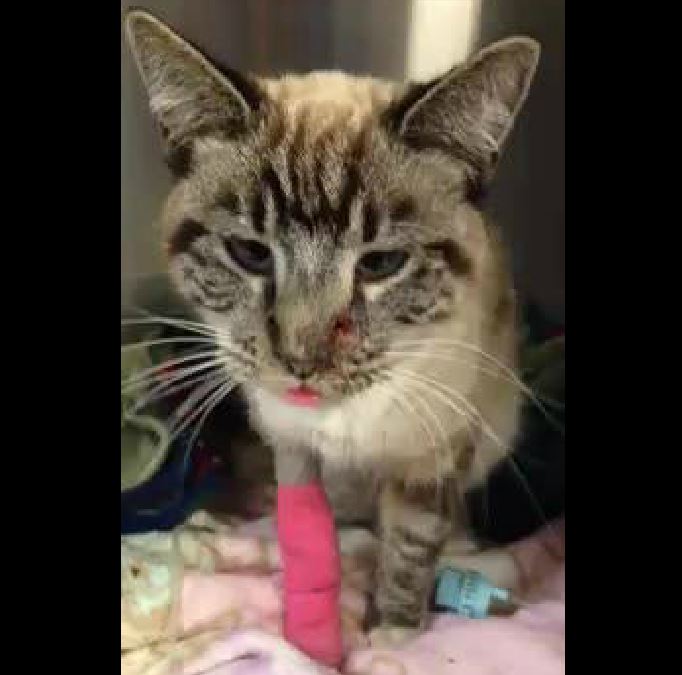 .
Quiver was found in a park in Washington City, UT on Wednesday, February 5 with an arrow shot through her face and coming out her side. One More Chance (C.A.T.S.) volunteer Candice Zook, found Quiver hiding under a bush  in Nisson Park at 9:30 am that day, with the arrow sticking out of her head.

Quiver was helped at Washington Family Veterinary Clinic, where staff removed the arrow and did some repair work on her mouth. Following the procedures, staff were optimistic about Quiver’s chances for making a full recovery but had concerns that scar tissue might form at the site of the wound in her esophagus, in an area they were not able to reach.

Quiver made such good progress in her recovery that she was released from the hospital into the care of One More Chance (C.A.T.S.) on Tuesday night, February 11. Quiver will continue to see the vet staff at  Washington Family Veterinary Clinic, and will return to the clinic for her spay surgery.

Kris Neal from One More Chance (C.A.T.S.) made the happy announcement that Quiver had reached the milestone at Facebook Tuesday night, saying:

“Quiver update: Quiver has done so amazingly well that the staff at Washington Family Veterinary Clinic released her into One More Chance care this evening. A sad good bye to her today as Dr. Barton, King, Shanna Baldwin Faapuna and Jessie Henderson give Quiver one last cleaning and check over. Quiver settled into her temporary home with apprehension, growling and purring at the same time! We had a change of rooms as Quiver can only eat wet food and the handicapped and injured cats that reside in the cattery eat dry food. Luckily, we have no kittens so Quiver moved to the kitten area where she will be served small but frequent helpings of wet. volunteer Donna Abboud brought her a princess bed and Diva toys.”

Quiver will be made available for adoption when she is healed and ready.
.

A reward of $9,750 has been offered for information leading to the arrest and conviction of the person who shot Quiver at close range, with The Humane Society of Utah offering $3,000, Best Friends offering $1,000 and HSUS offering $5,000 toward the total.

It was announced today that Washington City police had identified a juvenile suspect in the case after receiving several calls about the young person.

WCPD Officer Ed Kantor wass quoted in The Spectrum this afternoon, saying:  “The case has been forwarded to the juvenile courts for review and the possible filing of charges against the juvenile. What was told to me was that there were several leads that came in that investigators were able to follow up on.”

“We so need a conviction of some sort under our belt so that people take animal abuse seriously,” Kris Neal told the Spectrum for today’s story. “All the people who went and visited Quiver and saw the shape she was in are probably going to be in tears.”

Considering the suspect’s juvenile status, it remains to be seen whether the charge and punishment will be as severe as many are hoping for, to help send a message that animal cruelty is not acceptable and without consequences.

It was reported this afternoon that none of the tipsters had so far inquired about the reward.

See our earlier post, from February 7: $9,000 Reward Offered to Find Person Who Shot Cat With Arrow.

Here is a short video with Quiver at the Washington Family Veterinary Clinic on February 9: