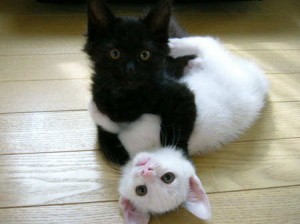 Q: “What makes some cats fearful? I have been rescuing cats for the last 12 years, and I have had several (two of which were born here) that have a high fear streak in them. The one I can understand, as he was rescued from a landfill when only a month or so old, and is partially blind in one eye. But the other two from different mothers I had taken in, they were born and raised here and both show(ed) a strong fear streak from babyhood. Nothing happened to MAKE them fearful – they just are.” – Tammy

A: A number of things can cause fear in cats. Poor nutrition in the mother during either pregnancy or lactation can cause abnormal behavior or developmental problems in kittens. On a similar note very early weaning, if also associated with lack of food or poor nutrition can cause fear as well. There is a ‘friendly’ gene in male kitties that can be transferred to offspring. Of course, there are many variables that influence behavior in cats. Poor socialization with other kittens and the mom, i.e., social isolation, can cause behavioral problems such as poor social play skills and timidity – especially when interacting with other cats. Lack of positive exposure to people and poor handling or little to no handling can also cause fear in kittens when it comes to their interactions with people.

A critical learning and socialization period occurs in kittens very early (from 3-8 weeks). Acceptance of litter mates begins at 3 weeks (This is the time a kitten, for instance, might bond with another species that might otherwise be prey – such as a rat or duckling). Play skills with other kittens begins at 5 weeks. Kittens also learn from and copy the behavior of other cats, especially their mothers. For instance, they learn from their mothers what to eat (and prefer what their mothers eat).

It is fairly important to get a kitten well-socialized to people by 7 weeks, if you want a kitty to be friendly and social with guests or strangers. Of course, our lifestyles often aren’t conducive to socializing kittens, so many cats only have positive social exposure to a few individuals. This is why there are many cats who are fearful or timid around people they do not know

Alana Stevenson can be contacted through her website AlanaStevenson.com. She provides consultations by phone & skype.