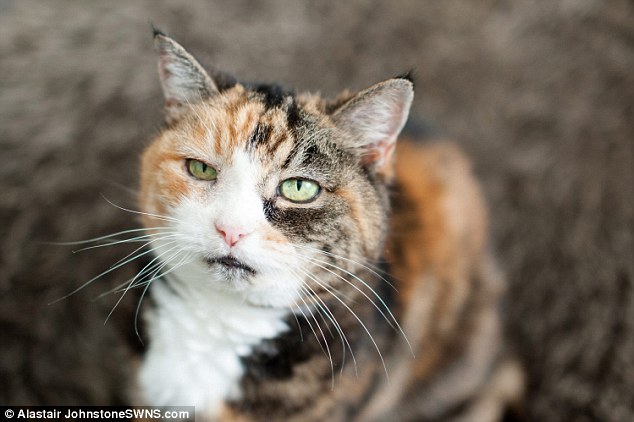 Putt’s owner thinks that his 25 1/2 year old cat may be the oldest cat alive. She is certainly among the oldest!

Yesterday we shared the story of a 24 year old cat named Olive, whose owner thinks she might have a chance of taking the Guinness World Records title for Oldest Living Cat. A cat named Poppy was the most recent holder of the title, also at 24, but died earlier this year.

A few other cats have been mentioned as possible title holders when Guinness selects a new Oldest Living Cat, and now 25 year old Putt has surfaced in the news but probably will not be added to the list of contenders.  Guinness makes their selection based on documentation proving the cat’s age.

Putts , a still-beautiful and active tortoiseshell cat from Sidmouth, Devon, UK  was born in January 1989.

Putts’ owner David Willey, 64, said: “She is an absolutely fantastic cat, and still very happy. We thought we were going to lose her a week or so ago, but she perked up and she’s fine now.

“She loves lying and napping in a quiet little place, and she liked her food too – but we have to break it up for her now.

“She gets groomed every day and she loves the garden we have. I think she has been kept lively by my wife’s cat Millie, who is 14.

“She still likes to play with her now and again, but she doesn’t let her get the better of her – my cat has long claws which she uses to keep Millie at bay.”

Putts – who was originally called Springer – was born in a litter of three to a mam cat named Daisy in January 1989. She lived with Mr. Willey for many years and seven years ago the family expanded when Mr. Willey married his wife Joyce, who brought her cat Millie with her. The couple also have a border collie named Ben.

Mr. Willey said Putts helped him through a period of ill-health before he met Joyce.

“When we lived in a flat together just the two of us she stuck by me,'”he said; “She was with me all the time.”

Mr. Willey does not have the documentation needed to prove Putts’ age but is happy to share his feline companion’s story and accept the recognition it brings for her.

“Putts is definitely 25 and a half, but I’ve got no proof of it,” said Mr Willey; “It’s a mystery to us how she’s survived so long.”