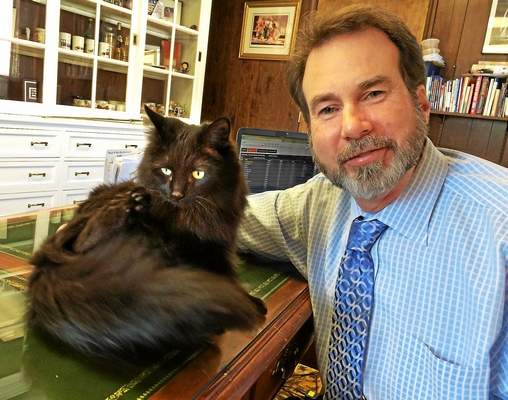 Cupid was rescued on Valentine’s Day 2014 when a Troy, MI couple spotted him as a sick, cold, flea infested kitten on the I-75 interstate highway in Detroit and took him to a vet’s, where they were told he had a health issue that meant he probably would not live a year.

This Saturday,  Keith Parke and his wife Christine Lahey will celebrate Cupid’s first gotcha day, and the young adult cat is so far doing well and going strong.

Keith recalled Cupid’s rescue in conversation with a reporter for the Oakland Press, telling how he saw what looked like a wadded-up sweater while driving on what was a bitterly cold day.

“It was in center median, up on a bridge,” Keith said.

“I saw two green dots looking at me.”

The couple pulled over and got out of their vehicle to rescue the kitten.

Keith remembered: “I thought he’d run off but he looked at me as though to say, ‘I’ve been sitting here waiting. What took you so long?’”

When the couple took the kitten for a vet check they were told he tested positive for FeLV (feline leukemia) and would likely only live for 6 months to a year, maybe longer with good nutrition.

“I thought we could find a foster home, but Cupid had feline leukemia,” said Parke, who runs Parke Place Insurance in Clawson.

The FeLV diagnosis meant Cupid would be difficult to place for adoption, and the couple were reluctant to bring him home to their dogs.  They were devastated to learn of the kitten’s condition after he’d been rescued and was about to start a new and getter life.

Then a plan came to mind … . Keith decided to try having Cupid live as an office cat at at his place of work, and that has worked out brilliantly.

“He took right to it,” said Keith.

Cupid has thrived and is playful, strong and healthy today.

“And he’s fascinated by insurance,” Keith said, perhaps stretching the truth a little.

Most of Keith’s clients enjoy visiting the handsome long-haired black cat, and in consideration of those who don’t, Cupid can stay temporarily in a different room until they’re gone.

Cupid has cozy digs at the office, with a nice bed and toys. He eats well, getting custom cooked meals that include livers and gizzards.

Keith says he will have Cupid tested again for lekemia. Sometimes a cat who has received an initial positive result will test negative later on, and may not carry the condition at all.

Either way, “We’re hoping the nutrition will provide him with many years of good health,” said Keith.

“You couldn’t ask for a better cat,” said Keith, who plans to spend some quality time with his rescued furry Valentine on his first Gotcha Day this February 14 .

Keith and Christine are long-time animal lovers who do their part to support animal charities and have three dogs adopted from the Michigan Humane Society.

Watch the video profile with Cupid and his petdad Keith Parke: