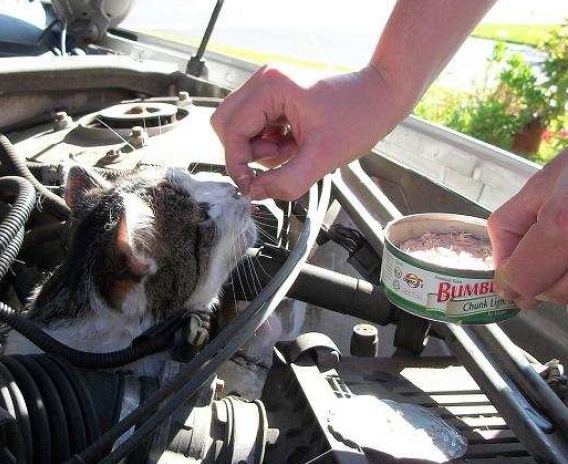 Chaska MN police are happy to report on a recent case where they were able to serve the community in small yet helpful way that shows their softer side. The current issue of the PD’s 4-1-1 newsletter  includes the story of  a wayward cat named Spunky and his rescue from a car’s engine compartment.

Here’s the department’s report on the call:

An inspection of the engine area revealed a full-grown cat was wedged between the motor and other vehicle parts under the hood. Only a portion of the cat’s face was visible. The cat had most likely crawled under the vehicle and into the engine area after it was recently parked and turned off. Cold temperatures the previous night likely led the cat to the still-warm engine area.

The woman and several neighbors tried unsuccessfully to remove the cat for quite some time before calling 9-1-1 for assistance.

An officer arrived and observed the cat was fine, but was stuck tight in the motor area. Tuna was used in order to entice the cat out. The cat loved the tuna, but still could not wiggle out. Another police officer arrived to assist and the officers removed numerous parts from the vehicle.

Eventually, the officers were able to pull the cat out from the engine area. As this occurred, a woman was driving past the driveway and stopped upon observing the cat. She stated she had been watching the cat for a family member and the cat’s name was Spunky.

Spunky had gotten out of the house the night before and she had looked for it all evening before giving up at approximately 11:30 PM. The officers assisted in bolting all of the vehicle’s pieces back in place.

As the officers left the area, both the cat and the vehicle were purring like new.