.
Worcester Telegram & Gazette staff photographer Christine Peterson went to the scene of a house fire in Worcester, MA on the evening of June 18 and captured the drama as a cat was discovered sitting in an upstairs window of the burning home, then was rescued by a firefighter and returned to a grateful owner.

Christine was standing with a group of onlookers when a woman behind her spotted the cat in the window and called out its location. The photographer focused her zoom lens on the window and saw the cat, who she described as “tongue out, pacing and struggling.”

Christine told firefighters about the cat, then she watched as a firefighter’s light cut through the smoke and fell on the cat from inside the house, illuminating the feline. She watched as the rescuer reached out to pick up the cat.

Worcester firefighter David Cady carried Wilma the cat outside and the gray tabby was reunited with her owner, Howard Fox, who was visibly overcome with emotion. 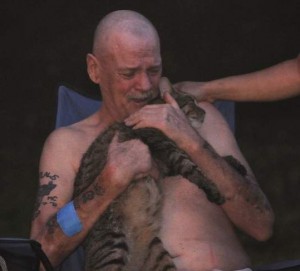