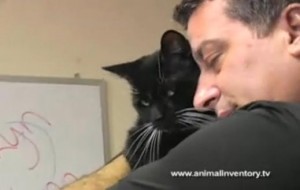 An organization in Massachusetts provides a wonderful alternative to surrendering pets.

For twenty six years, William Phinney Jr. devoted his life to being an animal welfare officer for the Massachusetts SPCA. Sadly his battle with AIDS caused his health to deteriorate to the point of having to surrender some of his own pets which of course caused even greater suffering. Bill Phinney died in 1995 and Phinney’s Friends was born. As a part of the MSPCA, Phinney’s Friends worked to help those with HIV/AIDS as well as the elderly care for their pets by providing food, vet care and other services to qualifying clients free of charge thus allowing them to keep their companion animals in difficult times. Unfortunately the recession forced the MSPCA to stop the program in 2009 but a group of volunteers reopened it as a non profit organization.

Phinney’s Friends has expanded their vision and now offers help for low income people with debilitating illness or other hardships care for their pets. Phinney’s Friends client Laverne recently said this about the organization, “They helped when I had chemotherapy. They helped with food, picking me up at the house to take me and my cat to get her shots. When she got sick, they were there to help with her medicine. When I was in the hospital, they took my cat in and housed and fed my cat, which was one less thing I had to worry about, so I could get well and come home. Recently I had to move from a very unsafe place. Phinney’s people were right there to follow the moving truck with me, cat, personal belongings in their own car to our new home.”

This video, filmed in 2009 near the time Phinney’s Friends was due to shut down (and before volunteers reopened it) showcases the important service they provide. This is a wonderful alternative to surrendering pets for those who find themselves in a life-altering financial or health crisis (you might want to grab a tissue).

Tax-deductible donations can be made to Phinney’s Friends via their website: http://www.phinneysfriends.org