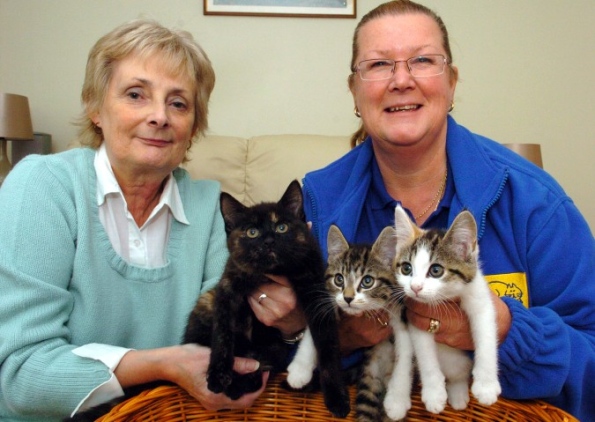 Meet Peanut, Almond and Nutmeg (as shown from left to right), three kittens who were saved and given their lives back.

The utterly adorable trio were tied up, placed in a sealed box and left to die earlier this month in Burton Latimer UK, where the weather is turning cold on October’s autumn nights. By chance, a local resident out walking their dog found the kittens on October 14 when the dog heard meows and went to investigate.

The kittens were taken into care by the Wellingborough and Rushton branch of Cats Protection and were then entrusted into foster care with Ann Glaus, who named them and is providing them with a loving home life until they are ready for adoption. Almond already has a home to go to; as of this writing, Peanut and Nutmeg still need to find their forever homes. The kittens are about 8 weeks old.

The Wellingborough and Rushton Cats Protection reports an increase in such dumpings this year, as have rescues and shelters throughout both the UK and the US, and beyond.  Whenever we learn of stories like this one we see appeals from the local animal welfare groups reminding people to please take unwanted companion animals to a rescue or safe shelter rather than dumping them. Since the thoughtless among us are dumping in increased numbers, that leaves the rest of us, who are in the majority, to step in and help, as did the person who found the kittens, along with Cats Protection, and Ms. Glaus.

5 thoughts on “Peanut, Almond & Nutmeg: Rescued From Being Tied Up In A Sealed Box And Dumped”