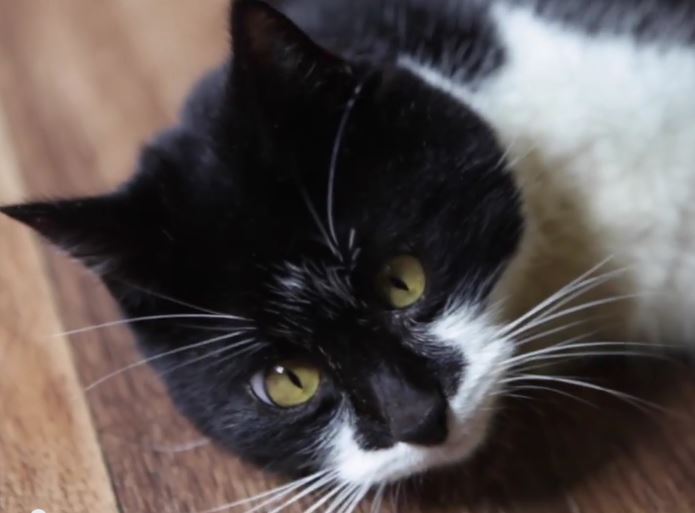 Quirkily handsome eight-year-old male tuxie kitty Ozzy became cross-eyed after falling from a windowsill as a little kitten. That and his vulnerable status as runt of the litter endeared him to the couple who adopted him and gave him a loving home.

Perth, Scotland residents Ian and Evelyn McDougall adopted the kitten, who is also described as having a permanently hypnotised look on his face. They say Ozzy  bears a striking resemblance to panther Bagheera — from Disney’s film The Jungle Book — who was hypnotised by the snake Kaa.

Ozzy, who can become somewhat disoriented by his condition, is back home safe and sound after taking advantage of an open door, slipping out of the house, and going missing in June. He was found wandering through a car showroom and was taken to a branch of the Scottish SPCA.  When the SSPCA posted his photo at Facebook a family member spotted him and he was quickly reunited with the McDougalls and back at home.

Ian said: “He looks like the panther from the Disney movie when you see the eyes.

“Ozzy fell off a windowsill and we reckon he dunted his head then. That’s when me and Evelyn took him in because he was the runt of the litter.

“I think he’s got tunnel vision, he can look at one bit and then it’s a bit further away. It’s very comical when he’s chasing a fly. He’s got real character about him.

“He’s a bit daft at times but he is very friendly. He’s definitely a house cat.

“The condition doesn’t hinder him in the house, he’s used to the house. He can run up and down the corridor.

“But my son left the door open when he was waiting on the school bus and he must have sneaked out in beside the floor pots and we mustn’t have noticed.

“We were very relieved to have found him.

“The SSPCA put it up on their Facebook and I said ‘that’s my cat’.

“Since he came home he’s started to sleep in our bed, I don’t know if it’s for security.

“He escaped three years ago but we found him later up the street petrified.”

Watch the SWNS video profile below, with Ian and Ozzy. It’s clear that Ozzy is a very well loved cat.

Here is Ozzy’s photo and post from the SSPA’s Facebook page. The June 23 post led to his homecoming after he got out of the house and wandered off:

Do you recognise this cross-eyed cat? Staff at Arnold Clark on Dunkeld Road, Perth, became concerned for him on…