Donors, cat owners to file class action lawsuit against Caboodle Ranch. Suit accuses founder Craig Grant of consumer fraud.
This is the press release from the group organizing the suit. All the information and statements included are theirs, not ours. 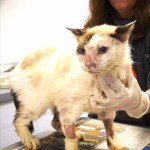 April 2, 2012 – A group of donors and former owners of cats relinquished to a nonprofit cat sanctuary known as Caboodle Ranch are coming together to file a class action lawsuit against founder Craig Grant, who was arrested Feb. 27 in the wake of a multi-agency rescue of almost 700 cats from the property. It is one of the largest rescues of animals from a hoarding case in U.S. history.

Records from Caboodle Ranch, located in Lee, Fla., indicate that Grant embezzled and misappropriated donations intended to cover care of the cats for his own personal use. Numerous financial transactions recorded on Caboodle Ranch’s 501(c)3 non-profit account show such items as airline flights, trips to Las Vegas, tickets to Disney on Ice and Daytona 500, purchases at Toys R Us, hotels, online clothing orders, online magazine orders, and gifts. Grant also admitted in court records that he did not routinely record cash donations.

One couple involved in the lawsuit is Larry and Ann Bechler, who rescue and rehome stray and feral cats. In 2009, after reading news accounts that portrayed Caboodle Ranch as a cat utopia, the Bechlers brought two cats there to be rehomed. Larry recalled asking Grant how many cats he had. “Over 300, but I’d like 3000,” Grant told him.

When the Bechlers left the ranch that day, they had a gut feeling that something was wrong. They returned the next day to retrieve their cats, but one, Emma, was nowhere to be found. The Bechlers made several trips back to Caboodle Ranch to look for Emma but never located her. “What a lucrative business charging desperate, caring people to take homeless cats at $100 to $200 each,” Ann said. “When they die a month later, he just takes more.”

In addition to using donations for personal activities, financial records show that Grant also used donations to pay for his personal assets. All of Caboodle Ranch’s land, vehicles, and buildings are owned by Grant. The organization itself has no physical assets. Grant has stated in interviews that he as founder of Caboodle Ranch he got $1000 a month in salary. Any personal expenses he had were legally required to come from his salary, not ranch funds.

Grant was arrested Feb. 27 and charged with one count of felony animal cruelty, three counts of misdemeanor animal cruelty, and one count of scheming to defraud. Bond was set at $250,000, and he posted bail later that day. Grant was set to plead not guilty to the charges during arraignment on April 2.

The American Society for the Prevention of Cruelty to Animals, at the request of the Madison County Sheriff’s Office and Madison County Animal Control in northern Florida, has led the rescue of almost 700 cats from Caboodle Ranch beginning Feb. 27. Animal welfare organizations reported that many of the cats showed signs of severe neglect and were suffering from upper respiratory conditions, ringworm, intestinal parasites, fur loss, and eye infections among other medical issues. Responders also uncovered numerous deceased cats on the property.

As of Feb. 27, the ASPCA had spent an estimated $200,000 on this large-scale rescue, an amount that continues to grow daily.

The rescue comes in the wake of an investigation of Caboodle Ranch by People for the Ethical Treatment of Animals, whose undercover investigator worked as a volunteer at the ranch for five months. Video and photos taken by the investigator show cats suffering from upper-respiratory infections so severe that they gasped for air and struggled to breathe, drooled, and had bloody mucus clogging their noses. Cats had untreated ulcerated corneas that ruptured, causing them to go blind and in some cases die.

The organizers of this class action lawsuit have consulted with Attorney Lucas Taylor from Madison County, Fla., who has been involved in litigation against Grant for nearly two years. Anyone who has made monetary donations or donated goods to Caboodle Ranch and/or has rehomed to the care of Caboodle Ranch is eligible to join the lawsuit. Dana Strunk, one of the organizers, is proposing that proceeds from the case be donated to the animal welfare agencies involved in the rescue and care of the cats. For more information regarding the lawsuit, contact (888) 950-4919 or email [email protected]