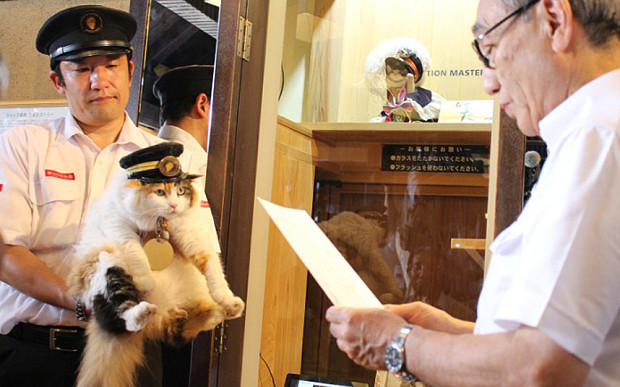 Tama’s successor Nitama has been sworn in as Stationmaster Cat at Kishi train station in Kinokawa, Japan.

Tama the Stationmaster Cat was much beloved and known worldwide, and was credited with rescuing the fortunes of a failing railway line after his appointment as stationmaster to the rural Kishi railway station at Kinokawa, in Wakayama Prefecture several years ago.

Tama died in June and his passing was marked with a Shinto memorial ceremony, a shrine and statements from local and railway officials. It was announced at the time that his protege Nitama wold take over his duties.

Now, after the 50 traditional Shinto morning period, Nitama has been officially sworn in to her position as Stationmaster Cat at Kishi.

Nitama was born in Okayama City and, like Tama, was rescued from life as a stray.  She was adopted by Okayama Electric Tramway after being found under a car on a rainy day and served as stationmaster at. Idakiso Station before becoming Tama’s deputy and protegee at Kishi in 2012. She is now 5 years old.

Nitama meets the qualifications for her role by being relaxed around people and willing to wear a hat, and is also known for her great beauty.

“The reason I appointed Nitama as a successor to Tama is that she had teaching experience from Tama directly,” said Wakayama Electric Railway president Mitsunobu Kokima. “Tama was very mild and she seldom got angry, though she was strict with her subordinate Nitama.”