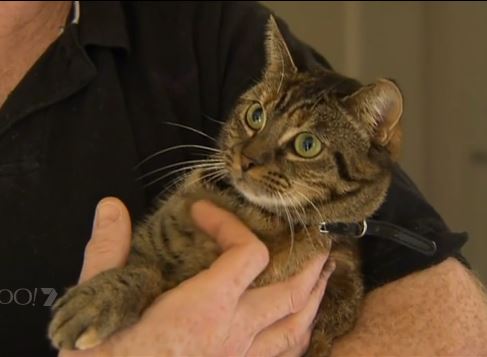 A newly adopted cat alerted her new petdad to a fire that would surely have destroyed the family’s home had she not gotten his attention and led him to discover the fire when he tried to leave for work one day earlier this week.

Tillie’s family had planned to adopt a dog when they visited their local RSPCA adoption centre in Melborne, Australia one day three weeks ago. Instead, they came home with the tabby cat who had been flea ridden and covered in the scratches she got in fights, and had recently given birth to a litter of kittens.

Matt Clayton and his family changed their plans and gave Tillie a home and she has already repaid their kindness by saving that home from a fire that firefighters say would have quickly have spread and destroyed the residence.

Matt’s wife and children had already left for the day when Tillie stopped him as he tried to leave for work on the morning of the fire. The concerned cat meowed persistently and gazed up at the ceiling, leading Matt to reach up and feel heat coming from above. He gave a gentle tug to a ceiling light and smoke poured into the room, leading him to call firefighters to the scene in time to save the home. Highly flammable compressed straw insulation above the ceiling would have led to a full fledged fire that firefighters say would have completely engulfed and destroyed the home within 20 minutes. The home and its contents would have been destroyed and Tillie may well not have survived.

Box Hill fire chief Ken Campbell said: “If Tilly wasn’t there, it would have been a catastrophe for sure.”

RSPCA spokesman Ryan Anderson said about cats: “They’re always prowling around and checking their environments,” and suggested that Tillie sensed something that made her very uncomfortable.

Tillie’s family is grateful to their new family member and plan to shower her with even more love than they have already shown.