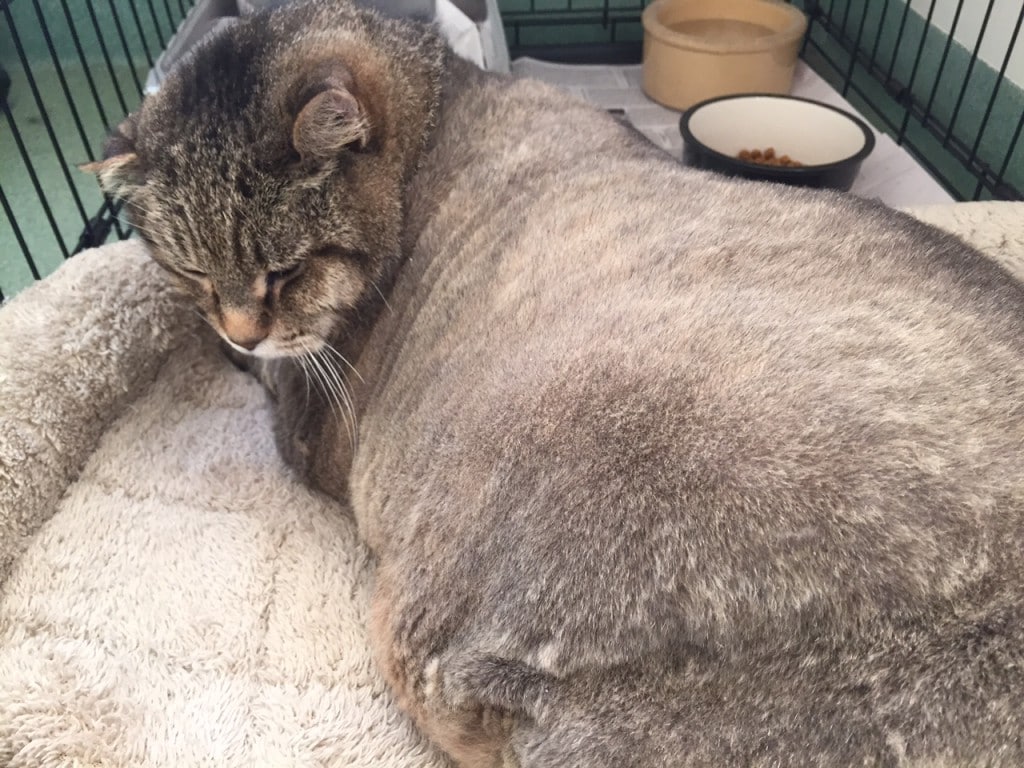 A Rhode Island shelter is caring for an obese senior cat recently let out of a car and dumped in a local park.

“Terrible, absolutely terrible. No animal should be treated like this,” Nancy Davey, head of cat adoption at the East Greenwich Animal Protection League, said when speaking with WPRO News about Jabba, as he is being called by shelter staff.

Jabba is about 15 years old, weighs 26 pounds and was suffering the effects of neglect when found at the park. His fur – shaved for obvious reasons in the photos here – was matted and stuck with feces, and he could barely walk.

Jabba was picked up from the park when someone called East Greenwich police on Friday, September 11 to report seeing a black Toyota drop the cat off at Scalloptown Park. Police responded to the scene and found Jabba on the grass. They placed him in a carrier and took him to North Kingstown Animal Hospital for care. He was released and transferred to the East Greenwich Animal Protection League a couple of days later.

“I’ve never seen a cat quite this heavy,” said Davey.

“It’s going to be extremely hard to adopt a senior cat that is severely overweight.

“We’ve put him on a small amount of food and we will give him exercise and he will hopefully lose some weight.”

“He really needs to go to a home so he can have love, attention and some exercise.”

Those interested in adopting Jabba and helping him to lose some weight and become more active again are asked to contact the East Greenwich Animal Protection League at [email protected] / 401-884-6333. 4 thoughts on “Neglected obese senior cat is dumped in park”