Yesterday afternoon, after seeing stories in the news about cats and the music that appeals to them, I followed up and found the site mentioned in the article, downloaded some audio samples and did a test of my own. You can test them, too. 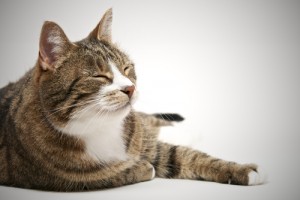 The piece the current crop of articles are based on, titled Animal Psychologists Discover What Music Pets Prefer by Natalie Wolchover of Life’s Little Mysteries, starts off by saying that, just as we think when we leave music on for our pets when we got out, our pets like to listen to music. Charles Snowdon, an animal psychologist at the University of Wisconsin-Madison, used the benefit of his ongoing reasearch on the subject as he teamed up with cellist and composer David Teie to produce music our cats are thought to want to listen to.  Both the researcher and the composer assert that, rather than the classical, MOR, easy listening or show tunes we’re likely to leave playing, our pets respond to “species specific” music, with pitches, tones and tempos tailored to their species. After an earlier line of inquiry, the pair eventually turned their attention to composing music for cats, and studying how cats respond to it.

David Teie has composed and recorded music tailored to the feline response. His website Music For Cats provides information on the reasearch and offers selections of his music for cats. There are downloads available, and plans for a cd are said to be in the works.

I downloaded the three sample excerpts available and played them, hoping to get a reaction from my two cats, Tuppy and Nobby. Tuppy may have been listening, as he remained in earshot but out of sight the entire time, but I got no reaction from him. Nobby’s response was entirely different. I hit Play on the first piece, cosmo air 2, and she came running from a little nook she had tucked herself into. As I played the excerpt a couple of times, she came up, got on the chair arm behind my head and rubbed herself against the back of my neck. I played the other two samples and she was attentive, but didn’t purr and rub as she had with cosmo air 2. I played cosmo air 2 for her a few more times and each time she purred and rubbed herself against me and the things surrounding me.

As you’ll find if you listen to the three samples, provided here, you’ll be able to easily recognize elements of the music.  Cosmo air 2 sounds like purring, along with sounds in a much higher register. Rusty’s ballad sounds like a soothing  heartbeat, and spooks ditty 1 has quickly descending runs that are cheery and stimulating, along with what sounds like birdsong.

I ran the test again today and got very little response from Nobby. I got a reaction from Tuppy on spooks ditty 1, where he came running, looked up at one of the speakers, and rubbed his cheek against the nearest surface. As I played the piece a few more times. He sat near the speaker and decided to groom himself.

Well, that’s the response from our house. Try the three audio samples on your cats and see what, if anything, happens.