The indoor Ragdoll cat is back home now after being lost for a month following a fall from his 14th floor apartment. 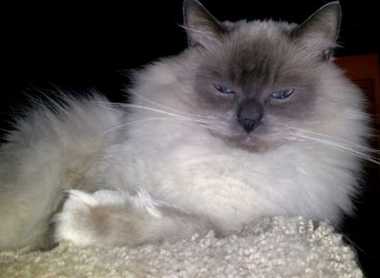 Mufasa disappeared from the balcony of his 14th floor apartment in Mayfield Heights, OH, outside of Cleveland, on March 14. His owner Raquel Daniel searched for him and put up posters offering a $500 reward for his return, but there was no word on Mufasa until he turned up back home on his own slightly more than a month later. The cat appeared to have been living in the woods near his home, had lost weight during his ordeal, and had suffered a broken paw. “Mumu” as he is fondly known, will have surgery to reset the bones in his paw. Raquel is overjoyed to have her boy back home.