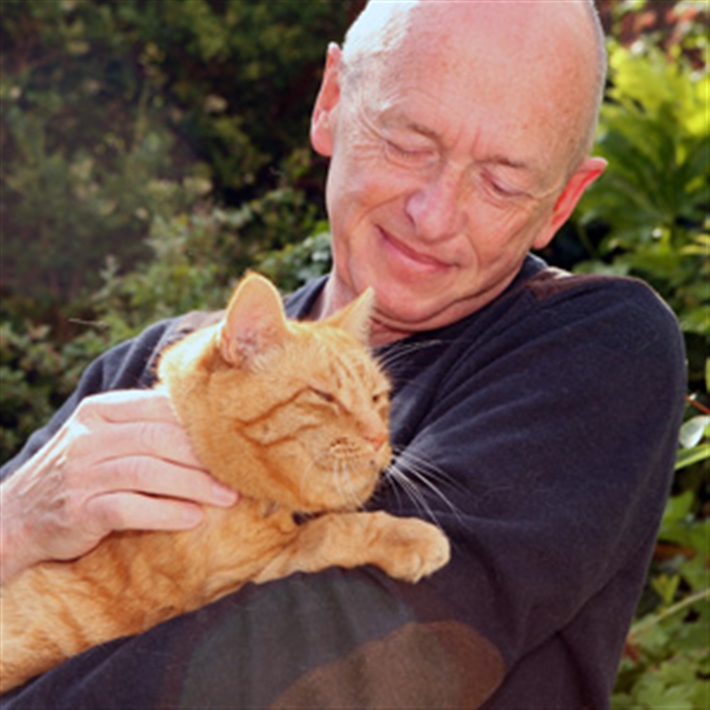 Mr. Chips got the loving home he had long waited for when he was adopted by Anna-Marie McConnell and Ian Turner, of Llandudno, Conwy, UK. The handsome ginger tabby has given back to his family with the therapeutic companionship he provides for his petdad.

Mr Chips has had his share of hard luck – found as a stray with a badly broken leg, he was left with a permanent disability and also spent six months in a rescue centre awaiting a home. But that hasn’t stopped him living life to the full and when new owner Ian Turner was diagnosed with a complex medical condition, Mr Chips proved to be an incredible support.

In the past three years, Ian has undergone a dozen operations, affecting both his physical and mental health, and leaving him at times feeling suicidal. Throughout it all has been eight-year-old Mr Chips, who Ian says has kept him going through times of despair.

Ian spoke to the Daily Post, saying:“The past few years have been very difficult, I’ve had times when I’ve been suicidal and things have seemed too hard to carry on. But Mr Chips has been the one to keep me going and gives me a reason to carry on.”

Ian’s partner Anna-Marie added: “Having Mr Chips in his life is one of the things that keeps Ian going.

“Mr Chips seems to sense when Ian is feeling down and will jump up on his knee and make himself comfortable and then demand some tickles. He has so much love that he gives to us both unconditionally.

“He really has helped Ian to keep going in so many ways over the last two and a half years.”

Mr Chips was selected as the winner of the Purina® Better Together category at Cats Protection UK’s 2014 National Cat Awards, which were given out today at The Savoy Hotel in London. Tomorrow we will share the big winner’s story (again).

The National Cat Awards are designed to celebrate the extraordinary tales of survival, companionship and bravery in the feline world.

Ian speaks with great emotion, telling about Mr. Chips and the important role the very special cat plays in his life: