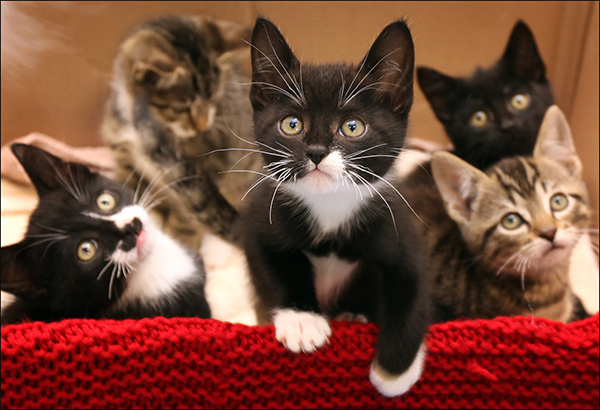 A litter of homeless kittens has been dubbed the ‘Mog-nificent Seven’ (in a bit of wordplay on moggies – a UK term for kitties – and the Magnificent Seven) after battling against the tail-end of Hurricane Gonzalo when they were abandoned in a cardboard box.

Despite winds of up to 75 miles an hour bringing down trees and causing severe travel disruption as the still-powerful remnants of the hurricane reached the UK, the seven siblings defeated the odds to end up in safe hands with the Blue Cross animal charity.

The eight-week-old kittens were found by a dog walker one stormy day last week and brought to Blue Cross Southampton rehoming centre for a vet check and TLC.

Kirsty Smith, Animal Welfare Assistant at Blue Cross Southampton, said: “These kittens are really lucky to have been found and brought to us after being dumped. Who knows what would have happened to them otherwise, especially being so little in those weather conditions.

“They really are a magnificent little bunch and as there are seven of them, we thought it would be appropriate to name them after the stars of the classic film!”

The kittens, nicknamed Yul Brynner, Stevie McQueen, Charlie Bronson, Roberta Vaughn, Horst Buchholz, Brad Dexter and James Coburn, have all found happy new homes after a story ran in the Southern Echo on Tuesday. The first of the 9 week old kittens will head to their new home this coming Sunday.

There is no word on whether the kittens will be renamed by their new families.