Amazing! A cat who went missing on moving day in November turned up 8 miles away, in the yard at his family’s new home one day last week.

Salem went missing on moving day as Elizabeth Ober and her family prepared to leave their apartment in Lexington, Kentucky for another place across town. The mostly-indoor cat panicked, got out the door, and took off.

“I went back to the apartment for three or four weeks and I never saw anything,” she told WKYT news.

Elizabeth went back every day for a month, leaving out food and looking for Salem. She saw pawprints in the snow, but no cat.

Then one day last week, Elizabeth was stunned to see a black cat who looked just like Salem, although smaller, sitting outside in the yard.

“There was a black cat sitting in front of our new house and I walked up to him and I gave him some food. My kids were so excited and I was like ‘I don’t know about that,’ ” she said.

The cat seemed to know the family dog, purred around Elizabeth’s children and had a similar sounding meow to Salem’s.

Elizabeth still had trouble believing the cat was really Salem, so she brought him to the vet for a microchip scan.

“It was the vet tech. He was like, this is your cat, I was like ‘no way’ so I read the scanner and I was like, it really IS.”

Elizabeth says Lucky, the family’s dog, is probably the most excited to see Salem back.

Salem was about half his normal size after being gone for several weeks, but is otherwise ok.

Elizabeth has tried to work out the route Salem might have taken, crossing roads, perhaps traveling through Calumet Farm, where thoroughbred hoses are bred and trained, braving the elements and managing to avoid coyotes.

Salem is a long-time family member: Elizabeth and her husband adopted him over 10 years ago while stationed at an Air Force base in Turkey.

Dr. Sarah Blanchett, of Chevy Chase Animal Clinic, checked Salem out after his reappearance. She told the Lexington Herald-Leader she’d heard of cats finding their way back to their families but said “never anything to this extent,” and called his journey ” just incredible.”

Elizabeth Ober is happy to have Salem home and says he “has resumed residence at the foot of the bed.”

Watch the WKYT report on the story: 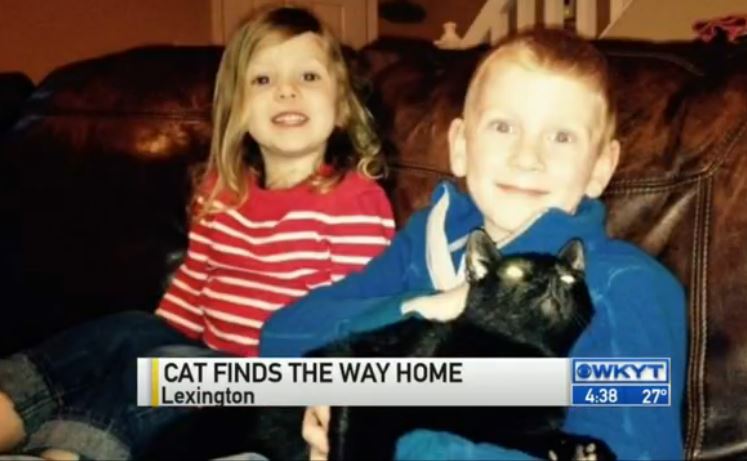