Jeanne Davis came home from the hospital to learn that a relative had taken her 2 beloved cats to the Wal-Mart and given them away. Mittens and Snowball mean the world to Jeanne, and now Meownty Hunters is ramping up the effort to find them and bring them home. 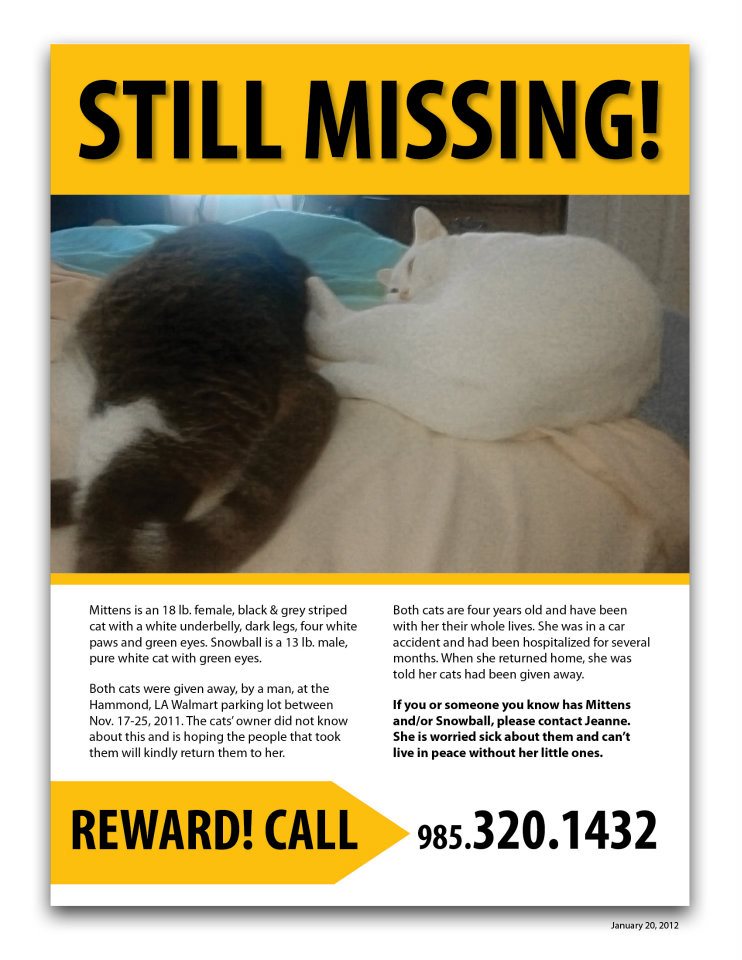 Jeanne is a 64 year old retired schoolteacher and librarian from Hammond, Louisiana whose home life centered around her two darling 4 year old cats, Snowball and Mittens.  Jeanne is disabled, but is able to get around and to care for herself and her kitties. A serious car accident landed Jeanne in the hospital in September of 2011, and complications from broken ankles kept her at the hospital and then rehab through most of  November.

Jeanne came home to discover that her brother had taken the cats to Wal-Mart sometime between November 17-25 and given them away.  She had arranged for someone to take care of Mittens and Snowball while she was incapacitated, but the brother took them away anyway. One report states that he misunderstood Jeanne’s condition and thought she would not be coming home.

A local news report this week quotes Jeanne saying of her fur babies  “They were always with me, right next to me and slept with me. They would come and greet me as soon as I came home from somewhere. I’m so lonesome for my babies and just can’t stand being without them. I worry about them being safe, loved, cared for and their missing me as much as I miss them.”

Jeanne’s vet said of her and the kitties, “Mrs. Davis is a very kind and sweet lady who loves her cats very much and despite her illness and financial restraints she made sure that her cats received the best care.  They were always current on their vaccines and monthly heartworm prevention. Our whole staff is saddened by this situation.”

Jeanne has been conducting a search on her own for the past two months. She’s used the computer to contact every veterinarian, animal shelters, humane society in the area, who might be able to help or who may have seen her cats; all to no avail.

This week’s story at AN17 Action News’s website has helped raise the profile of Jeanne’s search, both locally and far afield. Claudia Allen from Meownty Hunters learned of Jeanne and her heartbreaking loss and has brought her expertise to the search, speaking with Jeanne, contacting groups in Louisiana and calling for area volunteers. It looks like there will be a television report coming soon, too – we hope.

Sadly, the brother refuses to cooperate with the search. Beyond that, some Wal-Mart shoppers may not be the sort to notice posters or media reports, and someone who has had one or both of the cats for two months many be disinclined to give them back. When the cats are found, we can only hope they are being cared for be people who recognize that they belong back with the woman who loves them and is heartbroken to have lost them.

Anyone living near Hammond, Louisiana, or anywhere, who wishes to help with the search effort can contact Meownty Hunters at their Facebook page.