A woman who carried out a unique awareness campaign in order to find her missing cat has finally been reunited with her pet after four months.

Marmie went missing in July from his home in Barming, Kent UK, near Maidstone, and his petmom Tracy Brewster searched relentlessly for him right up until this week, when he was finally found.

Tracy believed that Marmie may have been dumped in Harlow, Essex, and she focused her search on Essex, Maidstone and the area in between.

Earlier this week, Tracy learned that Marmie had ended up in an entirely different direction and was in the care of a couple living in Surrey.

During the four month search, Tracy plastered a wide area with missing cat posters, distributed t-shirts with the cat’s likeness and assembled a group of supporters called Marmie’s Army. She drew attention to her missing cat by dressing in a Garfield onesie for a 50 mile walk that started off in Barming and passed through Medway, Tilbury, Brentwood and Chipping Ongar before ending up in Harlow.

The story made the papers, and Tracy was scheduled to appear on the ITV show This Morning next week.

The campaign cost Tracy her job as a housekeeper, as she devoted her time and efforts to the search.

Tracy wrote to her supporters on Tuesday, saying: “Marmie Army supporters – my baby has been found – he is in Surrey and I am going there as this is typed to pick him up.

“A kindly family took him in and although he is a little thin he is is alive. I am overjoyed and in shock to get Marmie back! So emotional and overwhelmed.”

“I wont be able to be contacted by phone, facebook or twitter tonight as I have lots of lost cuddling time with my Marmie and intend to spend tonight with him uninterrupted.

“I now will have a Christmas! Thank you all my Marmie Army supporters. So emotional and overwhelmed by getting Marmie back.”

Marmie was immediately responsive upon seeing Tracy when she picked him up from the couple who found him, and is said to be in fairly good health despite his ordeal, though he has lost about half his body weight.

Mike and Jane Lille found Marmie and renited him with his petmom, and told their part of the story in detail for Tracy and her supporters, writing:

I first spotted a ginger cat, possibly a stray, back in July hunting on waste ground between road carriage ways near our house. It was seen just a couple of times in late August and early September, once by a neighbour and once by my sister.. By mid September I began to see him more regularly in our garden and he was also seen in neighbour’s gardens. The weather was very dry and with hind sight he was probably drinking from our ponds.

Towards the end of September I started to see him more regularly but as soon as he saw either of us he ran away. We have a dog and as we now know Marmie doesn’t like dogs! One evening I managed to get fairly close, he still moved away when I called him but didn’t run away as he had before. I could see he was very thin and so we decided to start leaving food out, dog food at first as that is what we had. We thought that even if the cat was wild we could help it survive by feeding it. We continued to leave food out day and night under our caravan. We rarely saw the cat but the food was going and we realised that he was sleeping under a yew tree at the top of our drive. He was still running away into the field behind our house when we tried to get close.

After a couple of weeks of putting food out we realised that he was going into our garage through a broken panel in the door so we put a cardboard box in there with a blanket to provide a dry and safe shelter. Finally Marmie overcame his wariness of us and our dog and we were able to approach him and stroke him. We realised then how very thin he was and that he wasn’t a feral cat. We were able to coax him into the kitchen with food and we made a bed for him. We shut him in overnight and kept our dog away and he seemed quite content with this arrangement. We borrowed a cat carrier from my sister and took him to the vet, at this point we still didn’t know if it was a boy or girl! Our vet checked for a chip and the rest you know. Our vet contacted your vet via the details on the microchip.

Seeing you reunited with him was wonderful. We had no idea of Marmie’s story and the search for him. It took us totally by surprise! Over the few days that Marmie spent in our home we realised what a great character he is and he really seems to enjoy human company. He did very well to survive on his own, especially where he was first spotted and is a very smart cat. Once we started putting food out for him he seemed to stay fairly close by.

We are so pleased to have ended your nightmare and wish you both all the best.

You can see more about the search for Marmie and his happy homecoming at Find Marmie on Facebook. 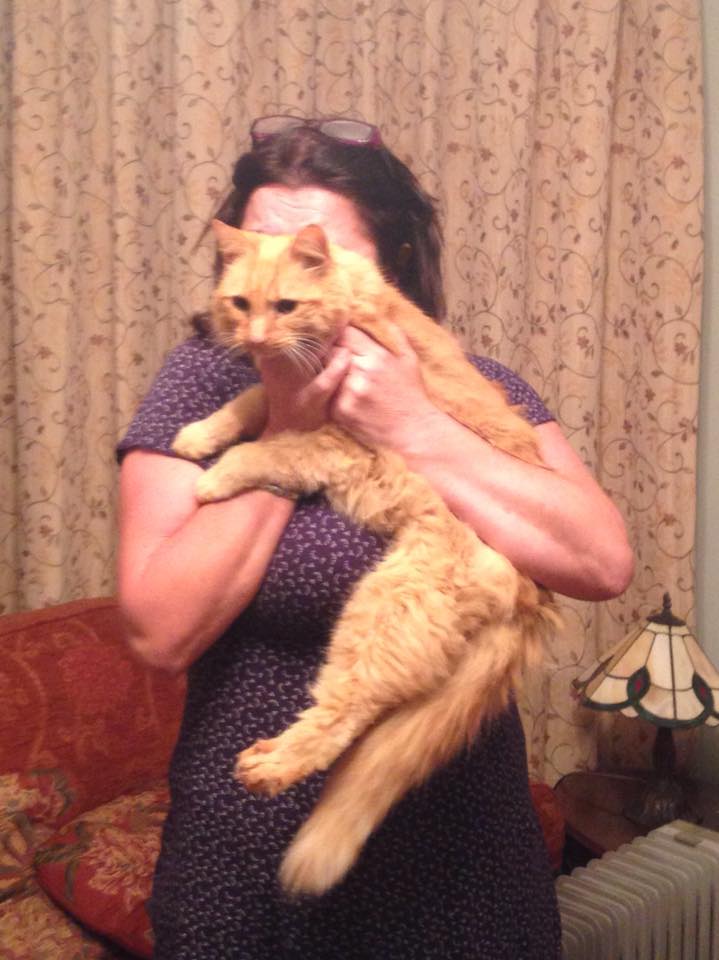 3 thoughts on “Missing cat Marmie is found after 4 months”