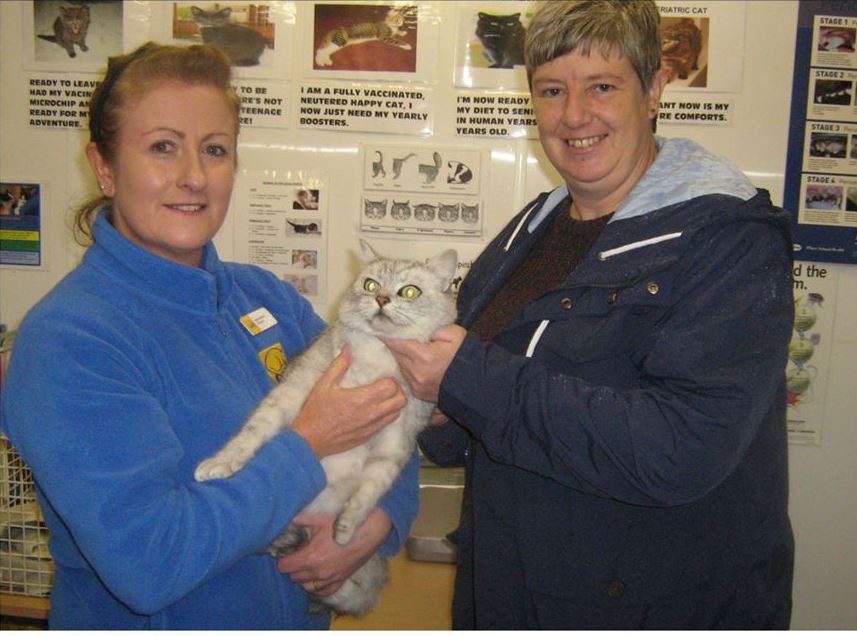 Detective work by shelter staff helped reunite Buzz with his petmom when he was brought in as a stray, a year and a half after he’d gone missing.

Buzz went missing on April 18, 2013 and was finally reunited with his petmom yesterday.

The long-missing cat was brought in to the Cats Protection UK Hereford Adoption Centre in Allensmore, UK as a stray. Determined to discover whether someone was missing the homeless feline, shelter staff searched available resources in hopes of finding a match among missing cat notices and listings.  They found Buzz’s missing cat listing on the free lost and found lists at Animal Search UK‘s website and were then easily able to get him home. His petmom came to Cats Protection to pick up her beloved boy, who she thought she would never see again after he’d been gone for so long.

Cats Protection Hereford noted the happy reunion at Facebook on Thursday, saying: “Brilliant day today. After going missing from his home in April 2013, Buzz was handed into us as a stray. Thanks to Animal search UK’s website we were able to reunite him with his very happy owners. A good day all round.”

Animal Search UK provides paid professional services, as well as free help in finding lost pets through posters, online listings and an army of volunteers, through which it reunites thousands of lost and missing pets with their families each month. Animal Search founder Tom Watkins says he is giving Buzz a free tracking collar from a company raising funds to market the devices through an indegogo campaign.

Buzz’s petmom is happy and grateful that her kitty is safe and back at home.