When the Marr family home in Michigan was consumed by a raging fire two months ago, firefighters combed the charred remains for the family’s cat Ringer, but he could not be found. The family resigned themselves to the fact that their cat had perished.

A few days ago Christine Marr and her husband took a walk with their dog Chloe to visit their former home. When they arrived, Chloe began acting strangely.

Chloe was erratically sniffing all over the house’s framework, then she started dashing around and scratching at a certain spot on the floorboards. The couple tried to pull the dog away, but she kept returning to the same spot. Christine’s husband finally pulled the boards back and shined a flashlight into the hole below. Then he heard a faint sound.

It was a meow.

Assuming that after two months it couldn’t possibly be their cat, it must be a stray, they managed to coax the cat out with some food. But when they saw a telltale mark on the cat’s tail, they realized that miraculously, the bony, malnourished feline standing before them was Ringer.

The couple rushed Ringer to a veterinarian in Kalamazoo, Michigan. “Not completely sure how he ended up in this hole in the floor,” Christine wrote. “He’s been down there for two months with no food and water. Very skinny but doing well. He has a feeding tube in his neck and it is going to be a slow process to reintroduce food, but he is going to LIVE!”

Christine says that Chloe and Ringer were always very close friends when they lived together in their old house, so it made sense that she would be the one to find him. The family is just thrilled to have their buddy back.

“I think he used a bit more than just nine lives,” joked Christine. 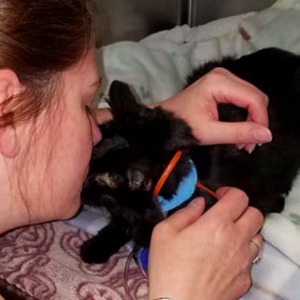 For the full article visit http://fox17online.com/