Miracle was found after her family discarded her, with her front paws wrapped in burlap and rotting. Her story got sadder at first, but she is improving and doing well now thanks to a caring shelter. 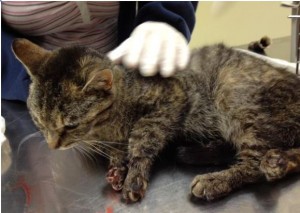 The Humane Society of Sandusky County, OH was contacted a week ago by Fremont police to rescue a cat and investigate a possible case of animal cruelty. Someone called police on a little girl seen with the cat behind the Paramount Cinemas in Fremont. The girl explained that she was trying to help the cat, whose front paws were bandaged and smelled badly.

That cat is now in the care of the Humane Society and is being called Miracle for the fact that she has survived and will recover from her misery. Miracle’s paws were wrapped in burlap, presumably to keep her from scratching at furniture. Underneath her bandages, her front paws were rotting and her claws had curled around and gone through her paw pads. The Humane Society suspects that her family, who bound her claws, dumped her when she began to decay and smell. To make her sad situation sadder, Miracle delivered a litter of dead kittens the night she arrived at the shelter.

The vet who examined Miracle said she could be rehabbed and have a good recovery, so her life is now headed in the right direction. She looked much better by her second day after the rescue, and is expected to be ready for adoption in 5 or 6 weeks. The Humane Society of Sandusky County is caring for several abused animals, and is accepting donations toward the vet bills that accompany such cases.

The Humane Society is actively investigating the case and wants to identify Miracle’s former family. They ask that anyone with information on the case please call them at 419-603-3313. For more on the Humane Society of Sandusky County, you can visit their website and Facebook page. Donations can be made through the website.
.

6 thoughts on “Miracle Gets Help”