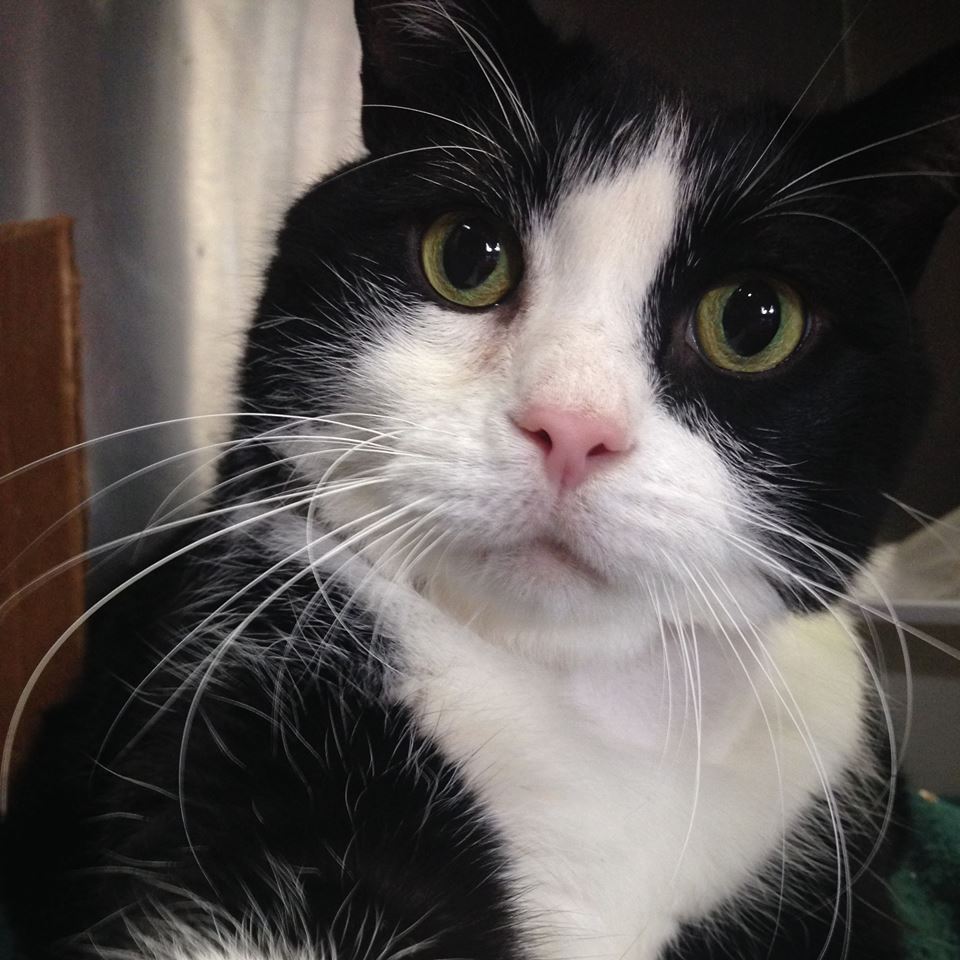 A veterinarian in London, Ontario is trying to raise $12,000 to provide a titanium prosthetic foot for a cat who lost a paw as a kitten and now needs help to walk and to lead a healthy life.

Marco lost a back paw to a weed whacker when he was a tiny kitten. He grew fat and eventually lost his mobility as he had increasing difficulty carrying his weight on one hind stump and an over taxed good hind leg.  Part way into 2014, Marco’s hind legs just splayed out behind him and he lost the ability to walk with any normalcy.  His excessive weight in itself threatened his well-being and the weight and mobility problem each made the other worse. Marco’s problems compounded and required colon surgery after his issues caused feces to be impacted, further endangering his life.

His veterinarian has known Marco since his accident 7 years ago and has recently become his guardian in order to get him the help he now needs. Marco needs to lose some weight which he is doing, and he needs a prosthetic foot so he can once again carry his own weight.

Here is Marco’s story, as told by his veterinarian Dr. Kyla Dillard at the Indegogo campaign page raising funds for his prosthetic surgery, Marco Polo Needs a Titanium Foot!:

A Note From Dr. Dillard:

Born to a feral mother and a handsome stranger, Marco was living under my clients’ front step. They found him when he got his left, rear foot cut off by a weedeater and rushed him in to my hospital.

By four and a half months of age, Marco already weighed 6.2 pounds (2.8 kilos), the size of many adult cats. At 3 years old, he was already at 24.4 pounds (11 kilos) and his owners brought him in requesting a thyroid test and full bloodwork, because they were concerned about his weight. He ate the same amount of food as their other cats.

Before he was 5 years old, Marco weighed 27 pounds (12.27 kilos). His owners tried many different kinds of diet cat food, nothing worked. We put him on food for diabetic cats, even though he was not diabetic. It’s called the Catkins Diet.

The diabetic food must have helped, because I didn’t see him again for 2 years and he still weighed 27 pounds, no loss, but no gain. You have to be thankful for small mercies.

August 25, 2014, Marco came in because he could no longer use his back legs. He looked paralyzed, with his back legs splayed out, completely extended, to the sides of his body. An x-ray revealed a tiny skeleton, Marco should be an 8 or 9 pound cat – max. Marco could feel and move his legs slightly, so, he had a chance.

His left, rear leg; having no foot, obviously cannot support his weight and the other leg had simply given out. At 7 years old, weighing 27.2 pounds, Marco was in danger of being euthanised, due to obesity…

…Marco’s owners love him very much. This is obviously going to be a complicated case, with mass quantities of intensive care needed and one, possibly 2 major surgeries ahead of him. The owners are a retired couple. When I gave the financial estimates, with tears in his eyes, Marco’s daddy said it would drain all their savings to go forward. They were still going to do it.

I gave them another option. Surrender Marco to my custody, and I would pay all the upfront costs for his care, if I could make him a spokesmodel for feline weight-loss. Yes, I’d love it if his medical bills magically got paid by the cat fairy- godmother, because Marco takes up hours of staff time per week and he is facing expensive, time consuming, surgical interventions. That seems unlikely. Marco had difficulty positioning himself to urinate and ended up with maggots in the fur near his genitalia that one of his caregivers painstakingly picked out for him. He also had trouble pooping and, when impacted feces could not be removed with forceps, he had colon surgery, where a half pound of feces was removed.

He’s had physiotherapy to help his hind legs retain whatever strength they had and, hopefully, make them stronger.  His caregivers have had him swimming in a bathtub, and walking with support while using a modified doggie wheelchair.

Dr Dillard has already provided treatment for Marco running to several thousand dollars of hospital and surgical care, and the veterinary practice has had to hire another employee since their employee Katie has devoted much of her time to his care.

Dr. Dillard says the $12,533.27 the Dillard Animal Hospital is trying to raise should be enough to cover Marco’s full implant. She says it will ensure she and her staff can continue to help him succeed and thrive, and to become a normally moving, healthy cat.

“This is not a prosthetic leg that will strap on and off,” Dr. Dillard told CTV London. “This will actually grow right into his bone, his skin and hair will grow right around it and it will be a permanent part of his body.”

The strain caused when Marco places his weight on his leg stump has thrown his spine, pelvis and hips out of alignment.  Dr. Dillard says he is also in danger of having a leg bone break through the skin.

“That’s why we want to get him an actual foot, so he can move around and run and play like a normal cat,” she said.

Marco will be able to have his surgery once he has lost about five pounds. Dr. Dillard wants to have the funding in place when he reaches that weight loss goal.

CTV News has two video reports on Marco that you can see HERE.

There is also a Marco Facebook page and a Marco the Cat – My Weight Loss Journey website.