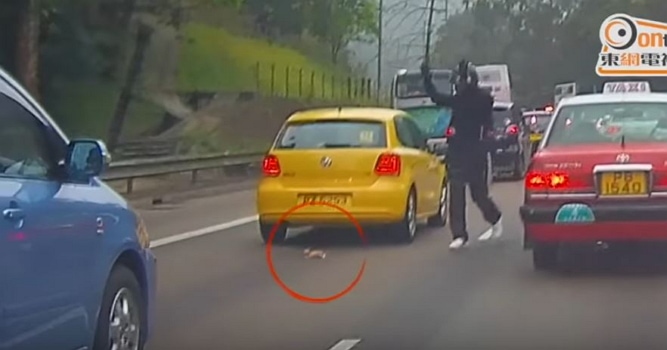 Watch as this man puts himself at risk to save a tiny kitten on a Hong Kong highway. Heroes are every where and, thankfully, he was able to make a successful rescue.

When seeing a little kitty stuck in the middle of rush hour traffic on a highway, would you risk your life to save the helpless feline? On April 27, Hong Kong firefighter Kwok Kin Wai, off duty, chose to lend a helping hand. Footage of his heroic rescue, captured by a dashcam, went viral after being viewed over seven million times on Chinese video sharing platform Miaopai.

Last Thursday, Kwok was riding his motorcycle toward Kowloon on the Lion Rock Tunnel Road in early morning traffic, when he saw a little kitty lying still on the highway as cars sped by over it. ‍

Initially hesitant to take action, Kwok couldn’t bear the thought of cars running over the kitten, so he eventually parked his bike at the side of the road, returning to save the kitten.

Kwok later posted pictures of the tiny cat on his Facebook page, describing what happened and asking if anyone would adopt the adorable kitten. The post received more than 47,000 likes and 5,000 shares. Kwok later sent the kitten to an animal shelter volunteer that afternoon.‍