.
An animal lover followed through on a promise he’d made to himself and donated his $500 in winnings from a scratch ticket to his local animal shelter.

Bryce Vucekovich surprised staff at Dallas Animal Services when he showed up on the weekend of December 7-8 with a pickup truck loaded with food, litter and other supplies for the shelter’s dogs and cats.

“I always kind of told myself, I always want to give to them if I ever come across extra money,” he said.

“I don’t think anybody wants to adopt a three-legged dog, but I made a bee-line for him,” said Bryce, whose other dog has only one eye. “That’s my goal in life is to have a bunch of adopted rescue dogs.”

The shelter and its foster volunteers care for hundreds of dogs and cats and are always in need of donations and supplies.

“Just the mass amount of animals they have there, it can’t be easy to manage all them,” Bryce said.

Dallas Animal Services thanked Bryce personally and online, writing at Facebook: “How many of you have wished you’d win the lottery so you could buy a truckload of supplies to donate? Bryce is living the dream and yesterday we were the beneficiaries of his generosity.” 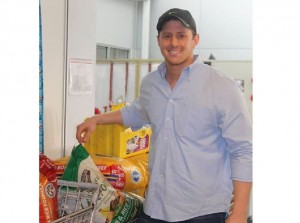