Merf  saved the lives of her babies, Shirley and Terry, when they were rushed to the  hospital with severe anemia and dangerously low red blood counts as a result of flea infestation on their tiny bodies. 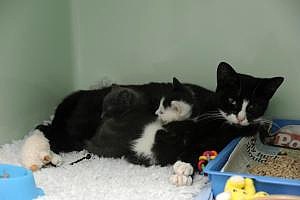 A mother cat saved the lives of her dangerously sick weeks old kittens after giving them an emergency blood transfusion at a hospital run by UK animal charity The Blue Cross.

Mama kitty Merf was rushed into the animal charity’s hospital in Merton, south London, with her four-week-old kittens Shirley and Teddy after they became seriously ill in the days before this past Christmas.

The pair had become anemic after being infested by fleas because their bodies were so small they could not cope with being fed on by so many parasites. As a result their red blood cell counts had dropped to a dangerous level.

After an initial examination, they were transferred to the larger Blue Cross hospital in Victoria, London, where their mum’s blood was tested to see if she was a match for her offspring. Luckily she was, so vets immediately set up an emergency transfusion in a bid to save their lives.

Louise Newman, a vet nurse at The Blue Cross charity hospital in Victoria, said: “These tiny kittens were so sick they could barely feed from their mum, but they were very weak and desperately needed the nutrients from her.

“To survive, they needed a blood transfusion quickly and thankfully their mum turned out to be a match. We had to take blood from her and pump it into the kittens’ veins, which is quite a challenge as they are so small.

“There was no guarantee a blood donation would be enough to save their lives, but we had to try. ”

The effects of the transfusion only last up to 48 hours but it was hoped Teddy and Shirley’s mother’s blood would give them enough time and strength for their bodies to recover.

They were nursed day and night in the hospital and, to the delight of staff, gradually began to regain their health and their mum began to feed them again.

Louise said: “This mum gave the gift of life to her kittens this Christmas – they’re lucky to be alive.  This case shows how important it is to make sure your pets are regularly treated for fleas as they can lead to serious infections and even death.”

After five days in hospital, Merf and her kittens were allowed to return home to relieved owner Louise Heron, 18, in Mitcham, Surrey.

Louise said: “I am so thankful for what The Blue Cross has done and I am ecstatic to have them home.

“I didn’t realize this could happen and I urge anyone with a pet to get them treated for fleas. It would be horrible to lose kittens or a cat through something like this.”

The Blue Cross runs three animal hospitals in London and one in Grimsby, providing charitable vet care to the pets of people on low incomes.  It also runs a network of rehoming centres across the country, relying entirely on public donations to look after thousands of sick and unwanted pets every year.