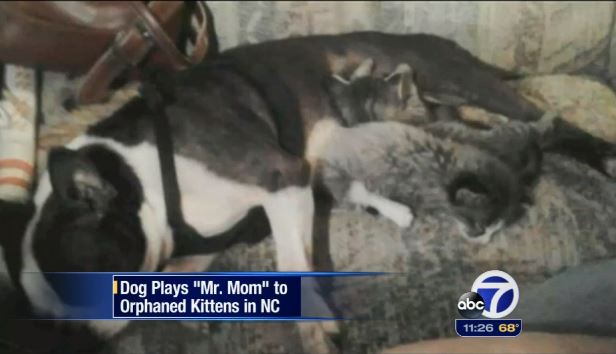 Willie the Boston terrier dog has taken on the role of loving dad for two orphaned kittens.

North Carolina resident Rob Dyson and his family took in the 3 week old kittens after their mother died, and Rob says he never imagined that his 7 year old dog would step up and take on the role of loving parent to the motherless babies.

“The good lord knows what he’s doing,” he said. “He gives some animals a supernatural sense of what to do and how to do it. They have fit into the family. They fit into Willie’s life, Mr. Mom’s life.”

Rob says he is amazed by Willie, who’s old enough to be set in his ways but still gentle enough to nurture the kittens.

Watch the ABC7 KGO report on the story: