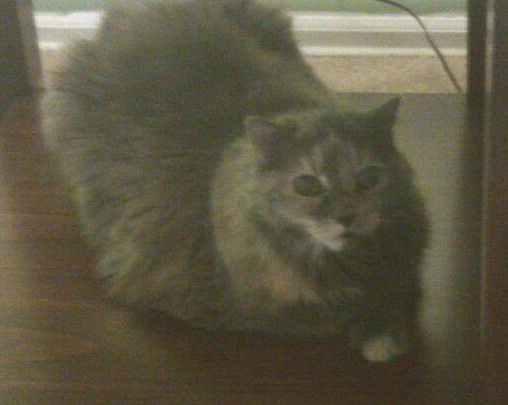 A grainy picture, widely shared, brought the plight of a Belleville NJ cat to the attention of many, as rescuers and advocates blanketed social networking sites with her story. Lizzie ended up scared and in a precarious position when her petmom, Angel, died, leaving her unloved and unwanted by the woman’s son, who reputedly sold the house as quickly as possible and was ill disposed to his mother’s little companion.

According to the widely-circulated report, the son is a hunter who threatened many times to shoot poor Lizzie. A family friend took Lizzie to her apartment building and placed her in a cage in the building’s laundry area in an attempt to at least keep her safe. The woman is said not to have been able to bring the cat into her apartment because of a severely allergic baby. According to the story, the landlord was furious in reaction to the cat being in the laundry room and gave the woman three days to find someplace for the cat to go “or else”.

Amy Kozell and Angels of Animals interceded and found a foster to take Lizzie, who is now safe from the malicious and violent son, and safe from the uncertainty of having nowhere to go.

This all occurred weeks ago. Earlier this month, by September 9, Lizzie was safely in foster care arranged by Angels of Animals. We tell Lizzie’s story now because there were numerous offers to foster or adopt Lizzie, thanks to so many being touched by her plight as her story was widely shared. An Angels of Animals volunteer specifically thanked the woman behind the share campaign for her efforts, saying those efforts were “a huge help”.

Facebook has made some changes recently that have left many users, or community members, unhappy with the social networking giant and discouraged. Download and installation of the non-Facebook affiliated  Better Facebook browser extension is free and easy and can restore the news feed back to chronological order and allow other customizations for those who want their old Facebook back. Whether users want to adapt to the new Facebook or use the fix to make it closer to what they were accustomed to, Facebook is still the number one resource for sharing, interacting and communication both for personal use and for rescue and advocacy work. We hope that the current as well as the next round of changes do not hurt those all important efforts.

Many came to Lizzie’s aid, or offered to, as they have done for other individual animals and for animal welfare causes through Facebook. We think it is important that this continues.