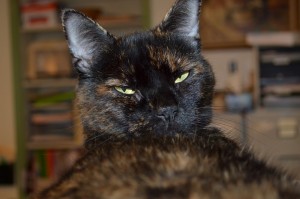 Tuck was surrendered to Kitty Cottage, a no-kill cat rescue in Pennsylvania, in early 2013 along with her sister Nip, following the death of their Mom. Their loving mom had rescued them 10 years prior when they were found outside as infants by a neighbor and she was the only home they had known.

Tragically, Nip died very suddenly, soon after their arrival at the cottage. After so much loss and change, Tuck was understandably distraught! Over the course of the next several months, she lost over 1/3 of her body weight as she refused to eat – despite the offer of numerous delicacies. Staff and volunteers at Kitty Cottage were terrified that whatever danger had claimed the life of her sister was rapidly closing in on Tuck and so they spent months (and hundreds) working with the vet to try and diagnose the cause of her decline. Her final exam notes concluded: “The significant weight loss with normal labs may suggest cancer, even though we do not have any evidence of it.”

One day, Tuck was found by a staff member in a very compromising position – attempting to pilfer the marinated chicken breast from her lunch bag. Encouraged by this, the staff member began making two lunches every day and slowly but surely Tuck regained her interest in regular meals (provided they were homemade and all white meat chicken). That staff member’s name was Brandi Greene, a Veterinary Nurse who has since been promoted to Shelter Manager. It was she who finally figured out that the likely cause of Tuck’s ailment was grief over the sudden loss of her sister compounded with the recent loss of their Mom. These days, Tuck maintains a picky appetite, though she still cannot be left unattended near people food. The staff have managed to get her back to cat fare – specifically (and exclusively) the “white meat chicken” varieties of Fancy Feast Elegant Medleys – and her weight has now stabilized. Described on her surrender application as “shy,” Tuck is now unequivocally the queen of the Cottage. She reigns over the lobby, and vocally greets all the volunteers and visitors, but she still longs for that one special person to call her own. She remains very attached to Brandi, but also quickly formed a bond with a short term foster parent (with whom she loved to snuggle under the covers), leading them to believe that she would adapt very well to a new furr-ever home where she can receive all the one-on-one devotion she craves. At Kitty Cottage, Tuck is regarded as a testament to the healing capacity of the feline spirit, and, of course, to the efficacy of food “made with love.”

Kitty Cottage Adoption Center is a non-profit, no-kill, cage-free adoption center in East Norriton, PA. It has been dedicated to giving homeless cats a safe, loving environment where they can be connected to potential adopters in the community since 2002, and to date has found furr-ever homes for over 2500 kitties. All of the cats in our care live in a home-like environment, have tested negative for FeLV/FIV, have been vaccinated, neutered, and microchipped, and are given veterinary care whenever necessary.

1 thought on “Kitty Transformed by Love & Now Searching for Home”