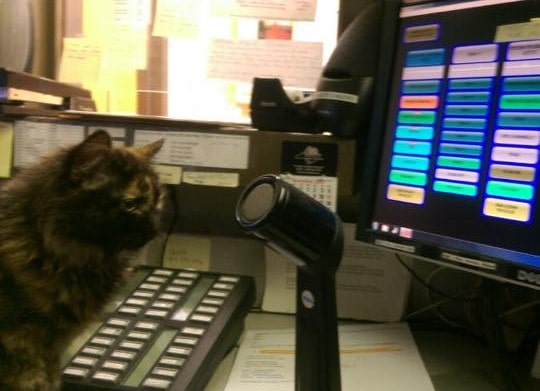 “I felt something brush up against my leg. It startled me a bit and I stepped back to see a dark fur ball looking at me,” police officer Alan Corn told ABC News.

“The cat followed me like a puppy walking right beside me everywhere I went. As I returned a few hours later and started to walk back inside, there was the kitty again at my feet. I thought for sure that it would leave and go home but it didn’t. It had started to get cold so I brought it inside near the end of my shift. I am in no way a cat person but I honestly almost took it home myself. This kitty had the best personality of any cat I’ve ever seen. It was very affectionate, fluffy, soft, and acted more like a little dog than a cat.”

Sqweeks became an instant favorite with everyone in the Tryon, NC, Police Department, and to show her appreciation for the kind reception, began assisting wherever she could around the office.  Tara Atkins put out a notice on Facebook in the hopes of finding the kitten’s owner, but to no avail.  However, Tara’s cousin and her husband are happily fostering the office helper, and according to Tara, is “making herself right at home.”