A firefighter found little Phoenix wandering in the burn zone of the recent Harriman, UT wildfire. Despite burned paw pads and singed whiskers, the kitten appears to be otherwise okay. 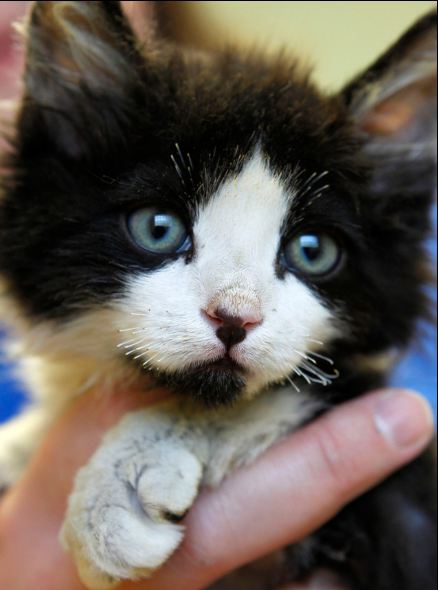 Phoenix, as he is being called, was found in the fire zone during the aftermath of the burn that evacuated Herriman, UT last week. Herriman is located at the Southwest edge of the suburban area below Salt Lake City.

The firefighter who spotted Phoenix and picked him up brought him to the Ching Farm and Rescue Sanctuary. Phoenix was transferred to CAWS (Community Animal Welfare Society), the organization that cared for Andrea, and will be adopted out through them.

CAWS took Phoenix to Wilson Veterinary Hospital for examination and treatment; he will remain there for a few days. Peonix has third degree burns on his paw pads, plus signed whiskers and fur, but is thought to be otherwise okay. He will have x-rays to further evaluate his condition, just to be on the safe side.

CAWS says that after he is healed and neutered, the adorably cute tuxie kitten will be made available for adoption. Calls to adopt Phoenix are already coming in.

Thankfully, the firefighter was patrolling the fire area at the right time to rescue little Phoenix, who is expected to make a great rise from the ashes of the Herriman fire.