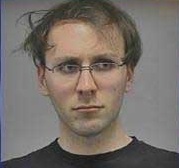 Alex Phelps, 26, of Shepherdsville, KY, arrested as the Craigslist Cat Killer in January 2011, was sentenced on Friday, January 11. He was convicted in December after pleading guilty to eight counts of animal torture across Jefferson and Bullitt counties in Kentucky. Phelps was facing a possible 40 year sentence when he unexpectedly took a plea deal immediately before last month’s scheduled trail, just before jury selection. His attorneys were displeased with his decision, having planned an insanity defense for him.

Phelps presented himself as a mild mannered animal lover as he collected his victims from Craigslist, and his horrific killing spree is a primary reason why people are advised not to give their cats away on Craigslist. While charged in 8 torture, killing and dismemberment incidents, he admitted to 26 killings to authorities and is thought to have even more victims.

In keeping with the terms of the plea deal, Phelps received a 5 year sentence.

Earlier during the run of the case, authorities made public Phelps’ bizarre statements made during interviews, including that he found cats to be “fascinating” creatures who can sense electromagnetic activity and, as scientists begin to understand this, it could open the door to human telepathy.

Phelps said of his victims,”I didn’t mistreat them. They were not killed in an inhumane manner. They were put down. I didn’t want them to suffer. They were already neglected enough. He went on to describe his methods in a manner that reflects his interest in becoming a doctor. Most of the details of the case are too disturbing to be shared here. The killings were followed by mutilation.

Jason Knopp, who gave his cats to Phelps, testified at the sentencing hearing on Friday, saying “Those cats were companions to me when I was going through a really hard time in my life. I was in end-stage renal failure.” When Phelps got the Knopp cats off of Craigslist, Jason Knopp thought they were going to be in good hands. Instead, he testified, “I know that my cats were tortured and mutilated, that they died slow and painful deaths.”

Phelps tried to get out of his 5 year prison sentence in court on Friday, saying he was ashamed of his “monstrous” behavior, and the defense team pushed for counseling and probation. Phelps said, “I am sorry to the victims for the pain that I have caused them, for what I have put them through and for how long they went through it, and I am sorry to my family for what I put them through.” After sentencing, Kopp said “I am very pleased, I think justice has been done today.”

The judge stuck by the 5 year sentence. Pamela Rogers, KY state director of HSUS said she approved: “I think that it shows people that might have an indication that they might want to do something to an animal, that they will get punished. And that is one reason why we try to pass laws, we try to make sure they are enforced that the perpetrators for these kinds of crimes are going to pay.”

Phelps has served more than 450 days in jail, meaning he is already eligible for parole. There has been no word that we are aware of, whether parole will be allowed.

A 2011 report featureds a woman who gave her kittens to a young man representing himself as an animal lover. When news of the cat killer’s arrest broke, she realized he had given the kittens to killer Alex Phelps.