Kathy’s Kitties has succeeded in convincing Gatesville prison to discontinue a new policy of trap and kill for feral cats living on the prison grounds, and will be allowed to manage and care for the cats from now on. When officials at Gatesville prison in Texas reversed a tolerance policy for 300 or more feral cats on the prison grounds earlier this year, and adopted a trap and kill policy instead, Kathy Kwieran of Kathy’s Kitties took action. Our post Kathy’s Kitties Works to Save Threatened Texas Prison Cats, from March 23, noted that the non-profit group is dedicated to providing spay and neuter services to domestic cats and their owners, and TNR to the Killeen, Texas area’s feral cats. Kathy has done TNR for many of the Gatesville Prison cats in the past, and was perfectly placed to lead the effort to save the prison cats.

Between the her success in contacting the right people, exposure from news reports and her petition at Change.org, Kathy made headway early on in her effort to save the cats’ lives.  She posted on March 22 at Kathy’s Kitties Facebook Page, “Good News: Animal Control agreed to let us get the eartipped cats. But the only way to save the others is by adoption.” Heart of Texas Feral Friends has also been involved in the effort and their members Cindy Grones and Amy Oakley attended a meeting with warden Lorretta Carmona and Director Gilbert Campuzano earlier this month.

Since then, negotiations have continued, with a very good outcome for the prison’s cat population, but 50 cats lost their lives in the meanwhile. Trapped cats were taken by Gatesville Animal Control, which practices heartstick euthanization.

It has been announced by all of the parties involved that the prison has relented on their new policy to rid the facility of the cats, and will allow them to remain, with TNR and colony care and management by Kathy’s Kitties. The cats will be treated for fleas and ticks, and will get rabies 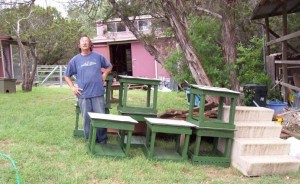 vaccines. Kathy will treat the cats for any issues which show up when they are are her clinic for their TNR visits.  Feeding station, shown at right, will be brought in and maintained. Some tame cats and kittens with good potential as domestic pets will be taken for rehoming.

Kathy is excited not only for Gatesville’s cat but for the precedent the agreement sets for the state’s prisons.

In keeping with the agreement to be formalized soon, Kathy’s Kitties will assume the cost for sterilization and other care for each cat, which will be $45 each.  A ChipIn is set up to accept donations toward those costs. We have included the ChipIn widget below.

“Kathy’s Kitties is making history in Texas! The 501(c)(3) non-profit located in Killeen, Texas, has offered to provide NO-COST Trap-Neuter-Return (TNR) to the Gatesville Crain Unit in an effort to humanely reduce the number of outside cats at the prison. It appears this will be the first endorsed prison TNR Program in the state! Kathy’s Kitties and its partnering animal organizations are waiting for the informal agreement from the TDCJ Region VI Director to begin TNR – we could possibly start as early as April 23, 2012. In the meantime, Kathy’s Kitties has launched this ChipIn to call on pro-TNR supporters to help us achieve this extraordinary goal. Please consider a tax-deducible donation to Kathy’s Kitties to assist in covering the costs of TNR (spay/neuter, rabies shot & left “eartip”) for these prison cats – no gift is too small! Thank you.”