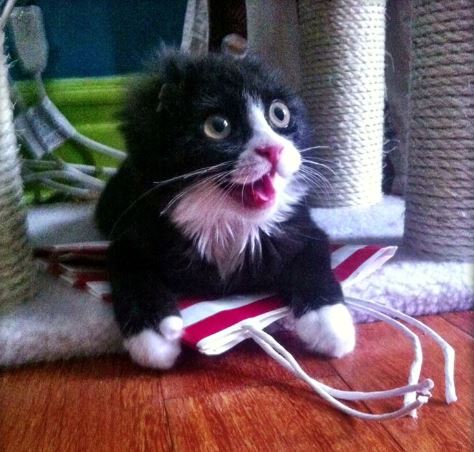 NOTE: We have added an alternate version of the video at the bottom of the post for those outside of the US who are unable to see the original.

We’ve followed the story and progress of Justin, the burned kitten rescued by a Good Samaritan from a Philadelphia sidewalk in April, through his rescue, recovery and adoption. Our most recent post, Justin Burned Kitten is Adopted (and gets a new Facebook page), from July 29, celebrated his adoption and directed readers to his new Justin, Fire Survivor Facebook page.

Justin has become a full blown celebrity in the past week, with stories being run on him worldwide.

Today he visited the television program The View, where Whoopi Goldberg narrated his story in accompaniment to a touching slideshow. Justin’s original rescuer, Good Samaritan Damaris Sanabria, appeared on the show and told her story. Then Justin and his adopter and petmom Kelley Peters joined Damaris and the hosts of the show.

Here is Justin’s segment from the show. We wish the studio audience had been encouraged to remain quiet; you can see that the noise is unsettling for the little cat. Otherwise, The View handled the story beautifully.

(If you are outside of the US and are unable to view this version of the video, please see the video at bottom of the post. It was recorded off of the TV. The quality is diminished from the original, but it’s the best alternative version, at present, that doesn’t present copyright problems.)

Justin Burned Kitten is Adopted (and gets a new Facebook page)