Steve was homeless for 10 months following last May’s tornado that devastated Joplin, MO. He was trapped on March 31, and has now been adopted into a loving home. 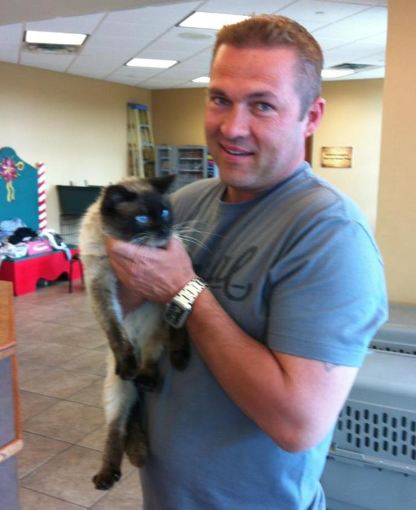 Animals Lost and Found from the Joplin, MO tornado and the band of caregivers and volunteers dedicated to helping Joplin’s displaced cats have once again aided a cat left homeless by the tornado that destroyed much of Joplin, MO on May 22, 2011. “Steve,” as he is called now, was one of three tornado kitties rescued from 23rd and Bird in Joplin on Saturday, March 31, 2012. He is Siamese and was found wearing a white flea collar that he had outgrown.

Animals Lost and Found posted at their Facebook page asking anyone missing a male Siamese cat, especially as a result of the tornado, to check on him at at the Joplin Humane Society Animal Adoption & Resource Center. Steve was placed under the temporary stray hold that allows families to come and reclaim their missing pets, with the understand that he’d be made available for adoption through JHS afterward.

Steve caught a respiratory infection and was placed in isolation. Donations made to Animals Lost and Found have helped get extra care for cats like Steve, but by April, attention to the tornado cats’ plight and to Animals Lost and Found’s cause and page had waned, along with the  donations that could be used for special medical care and shelter sponsorships.
.
Animals Lost and Found asked for someone to step forward and sponsor Steve, and pledged to see to Steve’s medical expenses themselves. Steve recovered and found a sponsor in Kim Wildman, with the result that an adopter would only have to pay the $10 for his microchip. After nearly a year on the street, the good people continuing to help the Joplin tornado cats felt it was time for Steve to know love and comfort, and be spoiled.
.
Steve was adopted today by Troy Newman and his family. Troy’s wife Michelle Bogle has advised those who, after seeing them together, would like to adopt both Troy and Steve, that they have a good home with her.
.
Nearly a year after experiencing a terrible loss and scraping by on the streets, another tornado kitty has his happy ending. Animals Lost and Found in the Joplin, MO tornado and JHS still continue to help animals in need affected by the terrible event.

1 thought on “Joplin Tornado Cat Steve is Rescued and Adopted”