The Humane Society of Missouri has opened emergency trailers to house pets in distress at two St. Louis-area locations affected by historic flooding that has forced many to flee their homes. “We want those animals to be safe so everyone can be brought back together once the danger has passed,” Debbie Hill told KSDK News. Hill is vice president of operations for the Humane Society. “We don’t want any member of your family left behind,” said Hill.  “That includes your cat, your dog, your turtle and your bird.”

The emergency trailers are boarding 50 lost and abandoned pets of people who were forced to evacuate their homes. One of the centers is in Arnold at the First Baptist Church, located at 2012 Missouri State Road. The other is in Ballwin at the Manchester Methodist Church, located at 129 Woods Mills Road, according to the Associated Press. Many animals have been separated from their owners after more than 10 inches of rain fell during a three-day period. 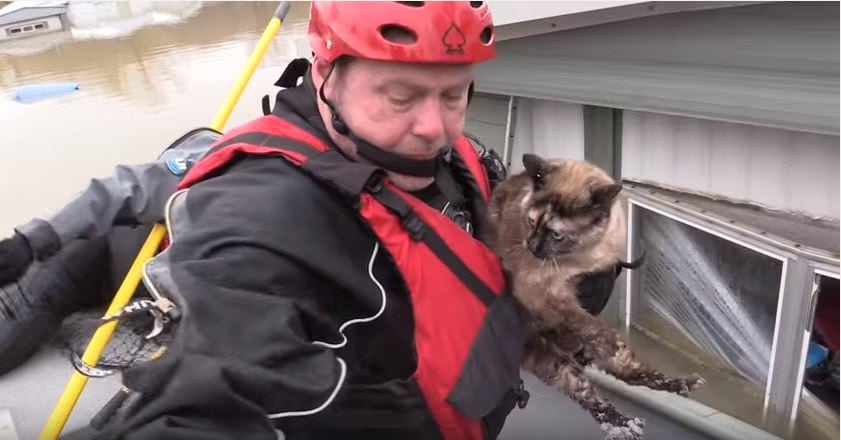 Four cats were rescued from flooded homes in one afternoon by crews trained in swift water rescue, according to the Humane Society of Missouri, which is posting photos and videos on its Facebook page. One cat was found floating in its litter box, just inches from the ceiling. It was pulled out of a window by members of HSMO’s Disaster Response Team. “Another reminder that if YOU are told to evacuate, take your pets with you!” the Facebook posting stated. “Your support is urgently needed to help us rescue and care for animals affected by these catastrophic floods and other disasters throughout Missouri. Donate today at www.hsmo.org/flood2015”