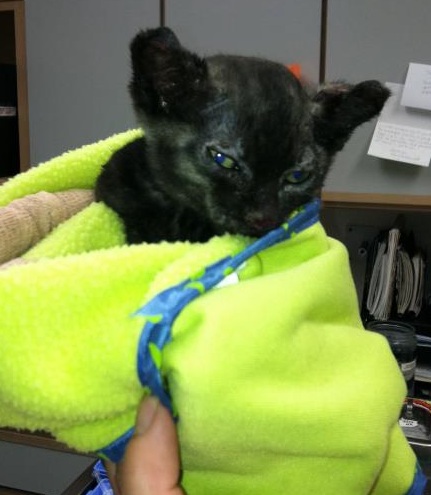 We had two stores earlier this month on Spirit, the intrepid little fighter whose will to live captured hearts after he was burned in a Carson City NV house fire. Sadly, he was unable to overcome his injuries. Run free little guy.

Spirit was found on the property after a devastating house fire in which several cats died. There were family pets as well as strays living on the property.  Tiny Spirit was brought to the SPCA, where he amazed everyone with his strength of personality and of will, hence the name Spirit. The kitten tried as hard as he could to survive but finally was unable to overcome the extent and severity of his injuries.

Carson Tahoe SPCA, which card for Spirit says, in making the somber announcement, on August 26:

With so much sadness, today we had to say goodbye to our beloved Spirit. After 5 weeks of fight and determination, our precious little boy let us know he had enough and his body could not go on any longer. His internal injuries and complications had become too much to bear. Spirit touched the heart of everyone he met and we know he will be missed by so many. We would like to thank everyone for all the support and prayers you have given us and our little angel. His spirit will live on in all of us, until we meet again.

Kitten Has the Survivor Spirit

2 thoughts on “He Tried His Best: Spirit Burned Kitten Succumbs to Injuries”