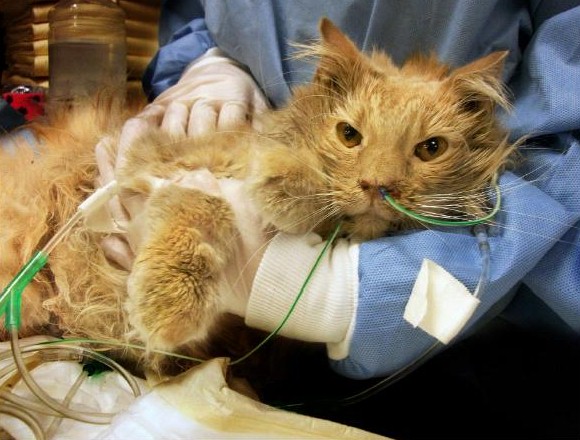 Blue Pearl Veterinary Partners issued a press release yesterday with the happy announcement that Jack The Cat’s condition has been upgraded from critical to serious. It was clear that the cat who’d been lost for 61 days at the American Airlines section of JFK airport had improved when he was transferred from the veterinary practice’s Queens NY hospital to the Manhattan facility, but now it is official.

Ben Davidson announced on Friday, “This morning, we upgraded Jack the Cat’s condition from
‘critical’ to ‘serious and stable. Jack has battled back from a steady stream of complications for the past 10 days. Today, his fever is gone. We’ve taken Jack off blood pressure medication, and he’s maintaining it on his own. And his wounds are starting to heal.”

According to the press release, petmom Karen Pascoe is elated by the news, saying “I couldn’t be more thrilled. After all Jack’s been through, this is a big step toward getting his life back to normal.”

“By sheer good fortune, Jack accidentally fell through a ceiling tile in the airport,” says BluePearl Veterinary Partners spokeswoman Joanne Lynch. “If that tile hadn’t given way, I hate to imagine how tragic Jack’s fate might’ve been.”

While Jack’s condition is improved, there may be lingering consequences from his long ordeal of suffering without food.  If intensive medical care can assure that Jack does not carry those lingering health concerns, then he is on track. His doctors and their support staff are doing everything to see that he recovers as fully as possible.

Understandably, Jack cannot receive visitors; he needs to spend his time healing, and the veterinary hospital staff need to attend to their work helping animals.

4 thoughts on “Good News on Jack The Cat”