Frosty is staying warm and being treated for a respiratory infection after being rescued this morning when a good Samaritan found him frozen to the ground and took him to get help.

The Friendship Animal Protective League in Elyria, Ohio and multiple local news sources reported today that a woman found Frosty covered in ice and frozen to the ground by the side of the road and rushed him to the APL, where he was warmed up and assessed and is being treated.

According to Friendship APL, the woman initially thought she’d seen a dirty clump of ice but got a “weird sense” and took a closer look, then discovered the kitten.

Frosty was covered in ice and couldn’t even move when he got to the shelter, but he started to meow as he began to thaw. Over the course of the day, he began to eat and was said to be doing well.

The kitten does not appear to have frostbite, but will be monitored over the coming days for any lasting effects of his frozen state. Frosty’s eyes are nearly shut from a respiratory infection that is being treated with antibiotics. He spent the day resting, cuddled on a heating blanket.

Friendship APL is optimistic for Frosty’s recovery and expects to offer him for adoption when he is ready. Frosty is estimated to be about 5 months old. He was friendly with his caregivers today, and staff say they will know more as he recovers.

Frosty will see the vet again later this week.

Friendship APL Executive Director Gregory Willey posted at Twitter this afternoon: ” Frosty the kitten was eating earlier. Still shivering… we will know in a couple of days the full effect of the exposure.” He wrote a while later:  “Frosty the kitten is still hanging in there and has been eating.” 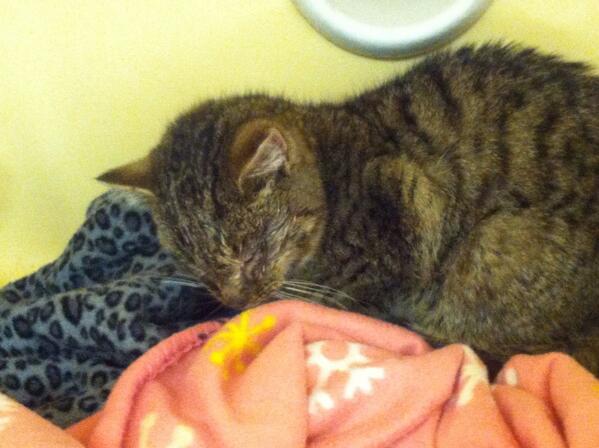 3 thoughts on “Frosty: Kitten Found Frozen to the Ground Gets Help”