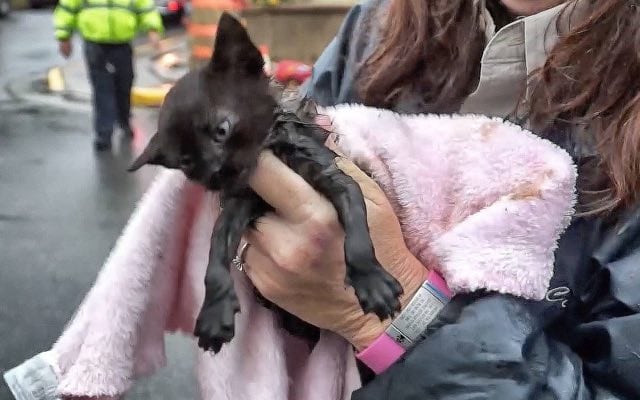 A four-year-old is being heralded as a hero for saving the life of a kitten. Camden Tolley and his mom, Sara, were on the way to preschool, when Camden heard something that wasn’t the rain or the morning rush traffic.  He got his mom’s attention enough so Sara knew when she heard the cries there was a kitten in trouble.

Immediately upon arriving at Horne United Methodist Church, 911 was called and both Animal Control and the Clayton Fire Department came to the rescue.  Firefighter Daryle Harris went down into the drain and brought her out.  The black kitten, who has been named Camden for her hero by Alley Cats and Angels cat rescue, agreed to take the wet, but in good condition little girl.  The only injuries suffered were raw paws from attempting to escape the sewer.   Jill Walters, vice president of the cat rescue group, said the kitten would not be available for adoption for several months given that Animal Control Officer, Angela Lee, assessed she was about four weeks old.

The team effort to rescue the kitten has left a mark on the Tolley family, too.  They will be putting in an application for adoption for kitten Camden, something they hadn’t been considering as they were just settling from a recent move from Roanoke to Clayton.  Oddly, the whole experience made them feel like they have found a home for themselves and soon, they hope, little Camden will be joining their family.