A well-intentioned teen trying to rescue a cat from a tall tree ended up stranded high above the ground along with the feline, leading to a double rescue by firefighters.

As the Bakersfield Californian put it in their report on the story, “sometimes the rescuer needs rescuers.” Such was the case when a 14 year old Bakersfield, California teen climbed 40 feet up a huge pine tree in an effort to save a stranded cat and found himself unable to get back down.

A neighbor also climbed the tree, trying to coax the cat down to no avail.

When the teen would-be rescuer was unable to descend from his spot high up in the tree on Sunday morning someone called the fire department shortly before noon.

The Bakersfield Fire Department dispatched two engines, a truck, a battalion commander and a training crew to the scene.  Bakersfield police also joined the 12 firefighters at the scene.

Using an aerial ladder, the firefighters placed the young man into a safety harness and brought him down to safety after about an hour.

Once the teen was on the ground, the firefighters went back up the tree and rescued the cat.

Moderate rainfall created a hazardous situation for the firefighters and the stranded teen, but no one was injured in the rescue.

A local resident commenting at the fire department’s Facebook page said afterward : “The cat is fine.  … Everyone is fine.” 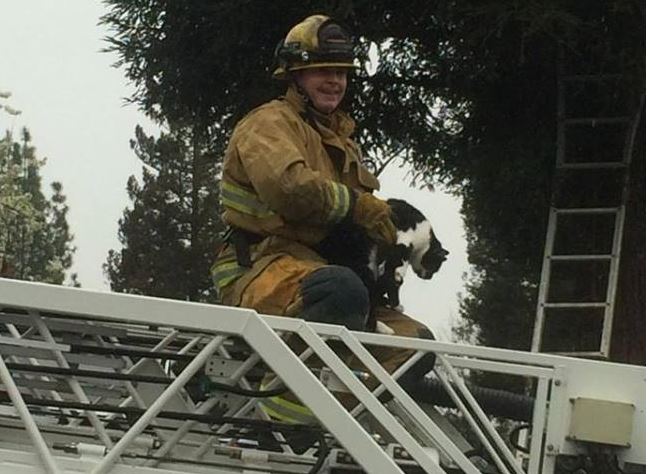