Family members were overcome with emotion as firefighters rescued their cat from their burning home and passed the kitty to a young woman who cried as she cradled the pet in her arms and walked away from her burning apartment unit.

The fire at the Park at Hurstbourne apartments in Louisville, Kentucky was one of two residential fires that broke out in the same part of town Wednesday between late morning and midday.

Nearly a dozen family were displaced from the Park at Hurstbourne fire, and the newly-homeless were encouraged to take temporary housing at the complex’s Varsity Club clubhouse.

As WAVE wrote in their report on the fire: Screams of terror, disbelief and relief filled the air along with smoke Wednesday as firefighters rescued pets from the burning complex at the Park at Hurstbourne Apartments.

“My daughter called freaking out because there was smoke in the building,” one tenant  told WAVE, “so I called the office and told them to go over there and see what was going on.”

“Their pets are their family; their children,” said Fern Creek Fire Deputy Chief Rob Storrie. “So, we try to do what we can to save what we can.”

The fire started on the first floor and traveled up a wall to the third floor and attic, damaging eight apartment units along the way. Six different fire departments dispatched more than a dozen firetrucks and crews to fight the fire.

Yesterday we posted a raw video from the scene of the other Louisville fire, where emergency responders gave oxygen to a cat saved from that fire. See: Raw video: Soaking wet cat gets oxygen at scene of house fire.

Watch the video below to see the moment firefighters brought the cat out from a smoke-filled second floor unit at Park at Hurstbourne and carried it down to safety before handing the kitty over to its concerned and grateful family. 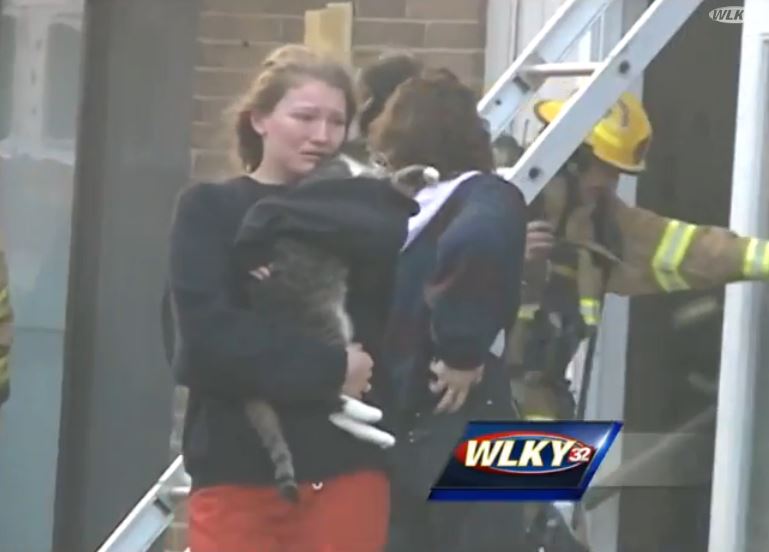