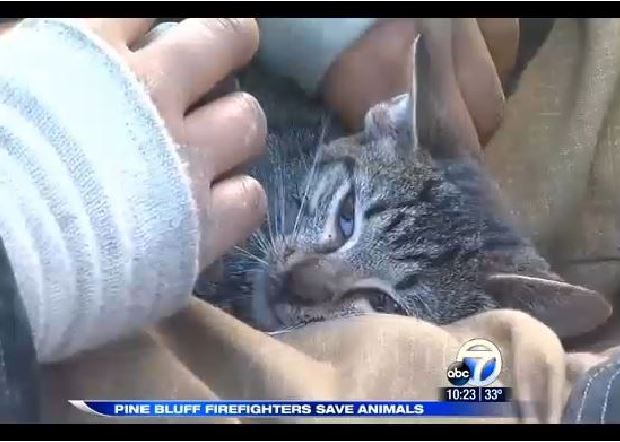 Two pets rescued from a house fire in Pine Bluff, Arkansas are alive, thanks to two quick thinking firefighters who are being thanked by the community but say they were just doing their job.

Pine Bluff firefighters Alexander Bryant and Keaton Reynolds were part of the crew called to the 2102 Howard Drive house fire at around 2 p.m. Monday. The emergency call initially came in saying there was possibly a baby inside the burning home. The firefighters quickly realized there was no human baby, but the family’s two pets were trapped inside.

“We found the animals, and he told us try to bring em back,” Keaton Reynolds said.

Alexander Bryant added: “We have training as far as humans go, but as far as animals…not so much.”

A kitten and a puppy were suffering from smoke inhalation and gasping for air, so the firefighters decided to give them CPR until they started breathing normally again.

“We just took the oxygen trading it back and forth from the dog and cat, massaging the chest of either animal, trying to make sure they were still breathing,” Bryant said.

The two pets are back with their family and are expected to make a full recovery. The firefighters say they are happy that the pets are doing well but insist they didn’t do anything special.

Watch the KATV Channel 7 report on the story that includes footage of the kitten and puppy receiving treatment at the scene: